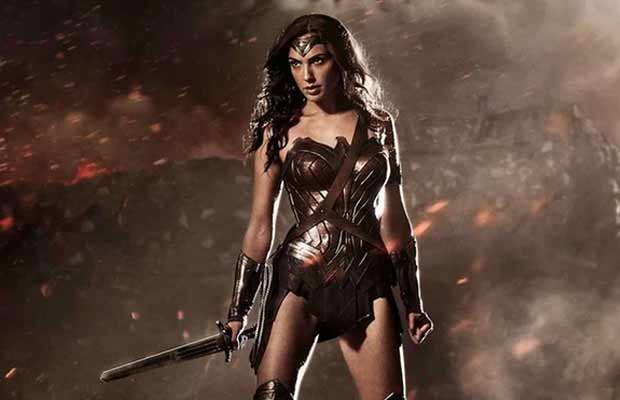 [tps_footer]Hollywood actress Gal Gadot made an impactful appearance in DC’s highly anticipated film, ‘Batman V Superman: Dawan of Justice’. The Amazonian princess made her presence felt in a man dominated film. The actress aka Wonder Woman manages to the steal the show from the caped superheroes. Right before the film release, the Wonder Woman’s standalone film’s first look has made its way to the internet.

Wonder Woman’s standalone film titled ‘Wonder Woman’ will be the origin story of the transformation of a young princess into a superhero. In the first look, we meet the family of the lasso-wielding crusader. She is not wearing her Justice League costume but a more monochrome gladiator look. The first look presents the origin of the Wonder Woman and her home, Themyscira, where she is Princess Diana of the Amazons. On Earth, she goes by the name Diana Prince as we saw in ‘Batman V Superman’.  In the picture released, we see Diana has her sword and the shield. Also revealed in the first look is Wonder Woman’s family. We get the first look at Diana’s mother Queen Hippolyta and her aunts Antiope and Menalippe.

The costumes of all the women and the weapons look pretty cool. The Amazons were exclusively female tribe from where Wonder Woman emerges as an alpha female superhero, who is man’s great hope for future. Wonder Woman’s home aka Themyscira has been created by director Patty Jenkins in the exotic islands of Italy and southern China.

Wonder Woman’s mother Queen Hippolyta is played by Connie Nielsen and her aunts, Antiope by ‘House of Cards’ actress Robin Wright and Menalippe by Lisa Loven Kongsli. The film is slated to debut on June 23, 2017, which will be followed by Justice League in November 2017.[/tps_footer]