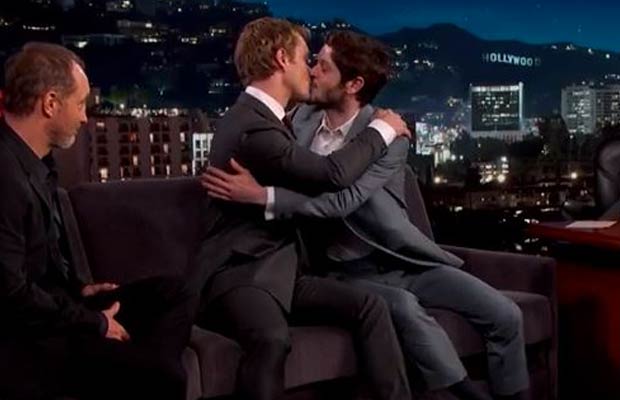 [tps_footer]Alfie Allen and Iwan Rheon who are known for their presence in the beloved series Game Of Thrones have shocked everyone. The two actors who are die-hard enemies in GOT have displayed their undying affection for each other on national television. All the Game Of Thrones fans here is something interesting you must know about the two enemies.

Alfie who plays the character of Theon Greyjoy and Iwan who plays the role of Ramsay Bolton are always at loggerheads. Recently the two stars made an appearance on Jimmy Kimmel Live show. Host Jimmy Kimmel at his witty best prompted the two actors to prove that there is no animosity between them outside the series.

In order to prove that everything is well between them Alfie Allen and Iwan Rheon lip locked on screen. The two claimed that there is nothing ugly going on between them and all the animosity is just in the show. Well, the kiss was surely a shocker!

Game Of Thrones is yet again ready for its new season. GOT season 6 will premiere on April 24th, 2016. The much-awaited series will be telecasted on HBO in the US, whereas the series will be premiered on April 26th, 2016 in India on Star World Premiere HD. Well, we cannot get that lip lock out of our heads![/tps_footer]