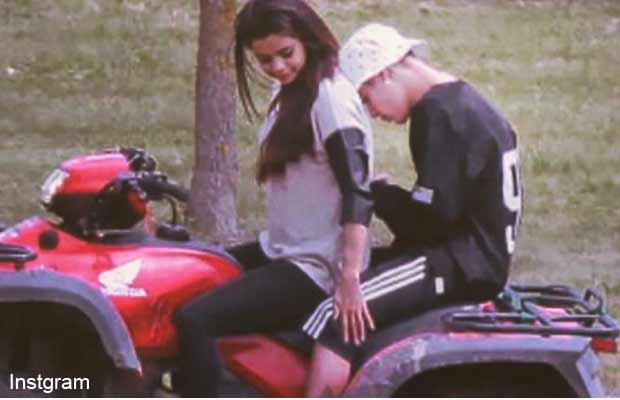 [tps_footer]Hollywood musician Justin Bieber has no plans of stopping the talks about him and his ex Selena Gomez any time soon. Just when the buzz of their patch up died down, Justin has given everyone yet another reason to think that something is definitely up. The singer took to his Instagram account and posted an old photo of him and Selena sitting cozily while she’s smiling. Justin Bieber wrote no caption at all, confusing all of his fans as to what is really going on with the two.

Is he just recollecting old memories, or are they getting back together? No one really knows! Nonetheless the photo got more than a million likes, indicating that thousands of their fans want the two to get back together. Apparently the photo is an old one from August 2014 when the two had patched up for a little while. Justin Bieber and Selena Gomez can be seen seated on a red ATV where Selena is touching Justin’s leg and smiling probably making sure he is seated well before she starts driving.

Fans naturally lost their calm and started flooding the comment sections with hopes of knowing whether the two singers have got back together. But Justin Bieber had other plans as the singer later captioned the picture writing, “Just a throwback calm down”. Well Justin you cannot just throw hints like these out of the blue and expect your fans to remain calm! Well fans also suggested that rapper Drake apparently commented on the photo saying that he thought it was a current picture of the two.

Both the singers have expressed in the past that they still care for each other, but more than often Selena has made it clear that the heartbreak was too much for her and the singer has finally chosen to move on. But Justin believes that there is so much history between the two, anything could happen! With this on and off status of these two, we wonder where Justin Bieber and Selena Gomez take their relationship after all these years.[/tps_footer]