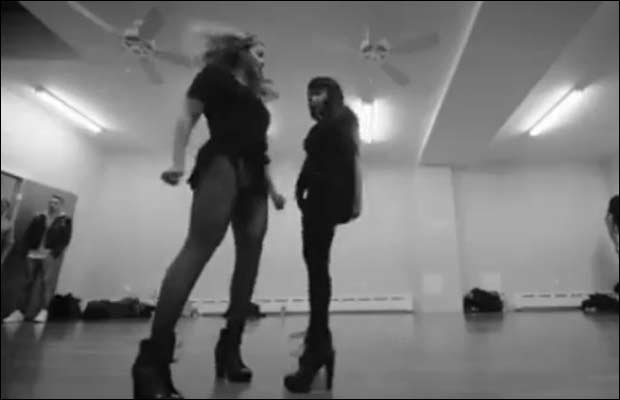 Hollywood beauties Nicki Minaj and Beyonce who came together for the track ‘Feeling Myself’ have now entered into an hilarious staring contest. The video was shared by Nicki on her instagram handle, and it seems like the video is quite old that she came across recently. Nicki and Bey performed together at many stage shows and have thus practiced together for the same. This staring contest video seems to be of one of such practices where both the divas were getting their groove on.

The short clips show how much fun both the musicians were having while practicing for their track ‘Feeling Myself’. The peppy song is heard playing in the background where Bey and Nicki decide to turn with one step and stop to stare each other and see who wins! Well the same step was seen in the official music video as well which released months ago. Which makes us think that this is a throwback video uploaded by Nicki Minaj who came across it.

In the staring contest video, Nicki Minaj says, “Let’s see who cracks first,” to which Beyonce states, “I think I’m gonna crack first.” But surprisingly it was Nicki who blinked first leaving Beyonce in a gist of laughter! The entire practice session seemed off the hook with too much fun, great music, dancing and two divas goofing around. Well we surely wish to see more of this chemistry as Nicki and Beyonce make one hell of a team. Give us an album together maybe?

On the work front Nicki Minaj released her album Pinkprint which has the track ‘Feeling Myself’ starring Beyonce. The official music video is available on the streaming service Tidal and nowhere else. Beyonce was recently spotted on a cozy vacation with hubby Jay Z and daughter Blue Ivy Carter. While on the other hand talk of the town was that Nicki Minaj is currently hunting for a house with boyfriend Meek Mill.