Annabelle: Creation has released in India today and the reviews are already in. The film is living up to people’s expectations than what we had anticipated it to be. Directed by David F Sandberg, the film stars Stephanie Sigman, Talitha Bateman, Anthony LaPaglia and Miranda Otto.

The latest movie of The Conjuring universe, ‘Annabelle: Creation’, is leaving audience scared AF. Going by the first reviews, the film is sure to keep you on the edge of the seat. Imagine a doll unexpectedly appearing out of the darkness, and performing a quick clap. Doesn’t that already sound scary? The second installment of the hit franchise is an appropriately horrifying creation.

Annabelle: Creation is a story about how several years after the tragic death of their little girl, a dollmaker and his wife welcome a nun and several girls from a shuttered orphanage into their home, soon becoming the target of the dollmaker’s possessed creation, Annabelle.

So, we decided to dig up best twitter reactions as a teaser before you head to watch the film today. Check out these best tweet reviews that are already scaring us:

#AnnabelleCreation is an experience in itself if you wanna get scared, totally worth it, some sequences will even make you scream like hell.

@annabellemovie is scary in parts. Much better than 1st part. #Annabelle2

Fun Fact: #Annabelle2 is terrifying and I may have peed my pants a little. Also stay after the credits.

#Annabelle2 was good! But the date was even better ? lol

when u go to the movies and some dude talks after every scene. no we don’t enjoy your commentary. #Annabelle2 was scary good tho

Ironically this should have been named,
Toilet-Annabelle ki katha.. 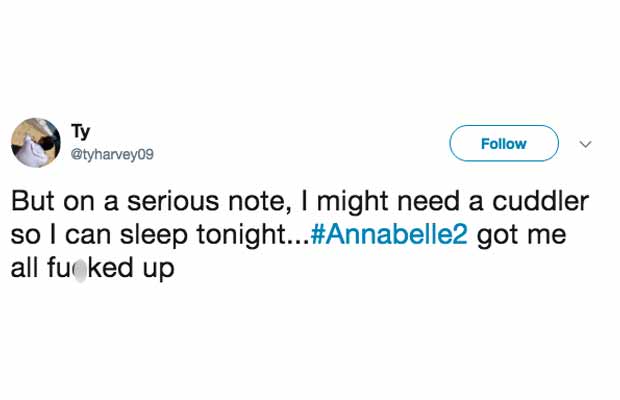 Watch the trailer right below: