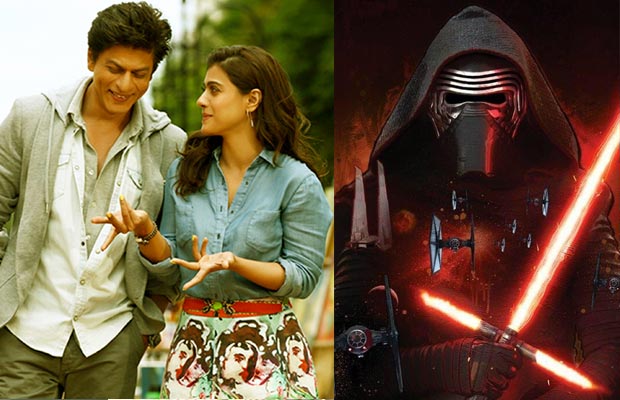 Looks like Hollywood film ‘Star Wars: The Force Awakens’ is too scared to compete with Shah Rukh Khan’s ‘Dilwale’. Apparently the sci-fi film’s release date is being shifted to December 25, which was earlier December 18, the day same day when SRK starrer ‘Dilwale’ hits the theaters. While it is absurd to think that makers of ‘Star Wars’ are shifting their date for ‘Dilwale’, it would make sense if they are releasing the film late in India to avoid the clash.

Nothing has been made clear and it looks like speculations have already begun. It is being said that ‘Star Wars’ release date shifting has something to do with SRK’s ‘Dilwale’. But from what we see, it looks like the decision might very well be for India in particular where the film might not be released on December 18. Force Awakens is actually set to premiere on December 14, 2015 according to reports in Los Angeles. Which means the film might release almost two weeks later in India.

Star Wars: The Force Awakens is coming back with the franchise after two decades which makes it all the more worth the wait. On the other hand the charismatic jodi of Shah Rukh Khan and Kajol is also coming back with ‘Dilwale’. Hence it will surely be a confusion for audiences in India and other places around the world, which movie to watch. The Force fans are scattered around the world in millions. But so are Shah Rukh Khan fans who are eagerly awaiting for his movie. All these reasons have led to the speculations that Star Wars release is being postponed due to ‘Dilwale’.

In our own sweet opinion, we should probably wait for the film’s makers to come forward with an official statement regarding the postpone, before making any speculations. Well we’re waiting to catch both ‘Star Wars‘ as well as Shah Rukh Khan and Kajol starrer ‘Dilwale’! What about you?