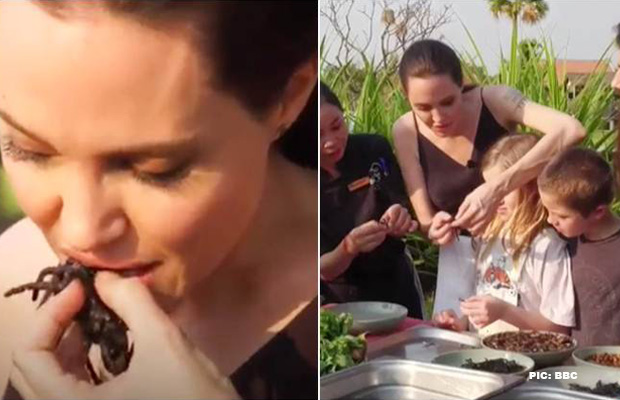 Hollywood actress Angelina Jolie was currently in Cambodia to promote her new movie ‘First They Killed My Father’, an account of the Khmer Rouge genocide told from a child’s perspective.

That’s where she cooked and ate tarantula spiders with her children on live television in Cambodia. Jolie demonstrated how to cook and enjoy the local delicacy to her children Maddox, 15, Pax, 13, Zahara, 12, Shiloh, 10, and eight-year-old twins Knox and Vivienne.

During this, interview with BBC World News, Jolie and twins Knox and Vivienne removed the fangs from tarantulas and fried them up with scorpions and other bugs to make a meal. “How do you flip a scorpion?” Jolie joked.

“See the hard part where you have the teeth? Take the fangs out. I think it’s always been a part of the diet (in Cambodia), the bugs, but then I think there is a truth to the survival during the war of course when people were being starved they were able to survive on things like this and they did,” said the 41-year-old Hollywood star.

She added she had first tried insects and arachnids when she adopted Maddox from Cambodia as a baby in the year 2002.

Jolie said that traveling to the country to film Lara Croft: Tomb Raider in 2001 led to an “awakening.” “I came to this country and I fell in love with its people and learned its history, and in doing so learned, how little I actually knew about the world,” Jolie, who is now a U.N. refugee agency special envoy, said.