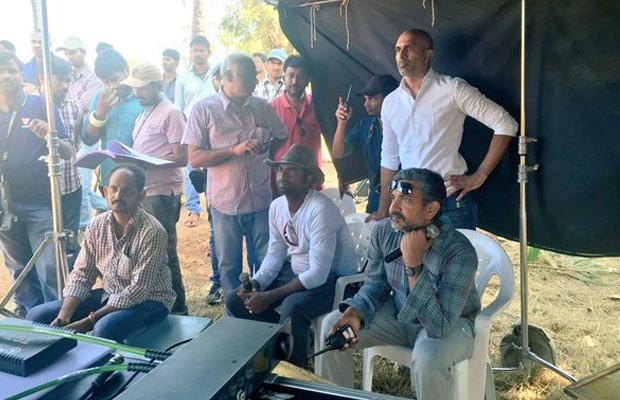 [tps_footer]Looks like the Southern film industry is on a roll as two big budget movies ‘Enthiran 2′ and ‘Baahubali 2’ have gone on floors back to back. After announcing the movie ‘Enthiran 2’ yesterday, fans now have another reason to rejoice as the much awaited second part of the ‘Baahubali’ film series has now begun shooting. The official twitter handle of the movie declared the same and according to sources close to the unit lead actors Prabhas and Anushka Shetty have already joined the sets to begin shooting.

Pre-production of ‘Baahubali’ took nearly four months which is why the film’s shooting got delayed. But director S.S. Rajamouli wants nothing but perfection, hence he was ready to delay the shoot till the time he got the pre-production work done with total precision. ‘Baahubali 2‘ will naturally be grander and costlier in scale and this time the director is taking all means necessary to keep any inside info from being leaked. Hence a strict no cell phone rule has been established by him throughout the shooting of the film.

Last time a lot had been jeopardized as ultimately many inside news and photos from the sets were leaked online which gave away too much of the film. ‘Baahubali 2‘ will hence be carried out in secrecy and we can only hope for the filmmakers to officially give us glimpses of the inside scoop through social media. The ‘Baahubali 2′ team wrote on Twitter, “After the widespread success of part1, the team is all set to get back to shoot part 2 from today. #Baahubali2Begins”.

Directed by S.S. Rajamouli, ‘Baahubali 2′ has been produced by K. RaghavendraRao, Shobu Yarlagadda and Prasad Devineni. Star cast of the film boasts of an impressive lineup including actors Prabhas, Rana Daggubati, Anushka Shetty, Tamannaah, Sudeep, Sathyaraj, Nassar, Ramya Krishnan and Prabhakar. The film is touted to release in 2016 but due to the shift in the shooting date, the release date might also get shifted to 2017.[/tps_footer]