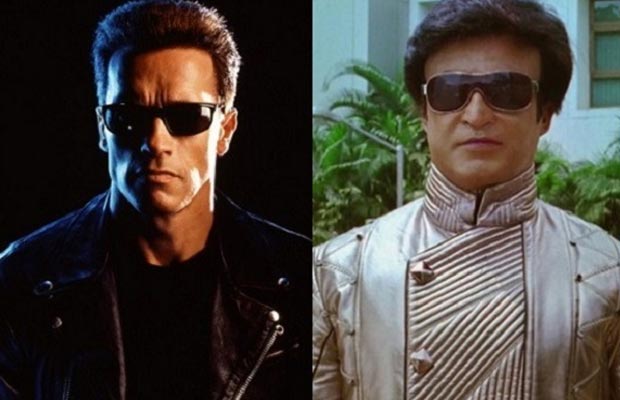 Rajinikanth’s upcoming film ‘Robot 2’ is making major moves as Hollywood star Arnold Schwarzenegger has been roped in for the film. Director Shankar has finally confirmed the same and put a rest to the nonstop speculations. The talks of Arnold joining the film have been doing its rounds for quite some time now and it has been revealed that the Hollywood hunk will be flying down to Indian in January 2016 for a shooting schedule of 25 days.

Recently it was also revealed that actress Amy Jackson has been roped in to essay the role of lead heroine in ‘Robot 2’. Apparently ‘Robot 2’ (Enthiran 2) is going to be a superhero film with a backdrop of love triangle, taking inspiration from Ramayana. Which indicates that Arnold Schwarzenegger will probably be the modern day robot version of Ravan! Well it won’t be hard for him as the actor has been playing the role of a robot since the beginning of ‘Terminator’.

Arnold Schwarzenegger’s recent film ‘Terminator: Genysis’ released recently and the actor has finally allotted dates to Shankar for ‘Enthiran 2’. Apparently the actor had attended an exhibition put up during Shankar’s previous film ‘I’ starring Vikram, and had expressed his willingness to do an Indian film soon. Seeing the opportunity Shankar narrated the story of ‘Robot 2’ to Arnold who absolutely loved the storyline and enthusiastically nodded yes.

‘Robot‘ that saw Rajinikanth as ‘Chitti Robot’ will be back with another action packed high VFX loaded sci-fi film. And with Arnold Schwarzenegger’s addition to the film, we cannot wait to know more about it! Superstar Rajinikanth is currently busy with the shooting of his film ‘Kabali’ with Ranjith. He will be seen in a double role in it, much like his film ‘Robot‘. Robot 2’s shooting is expected to go on floors early 2016.