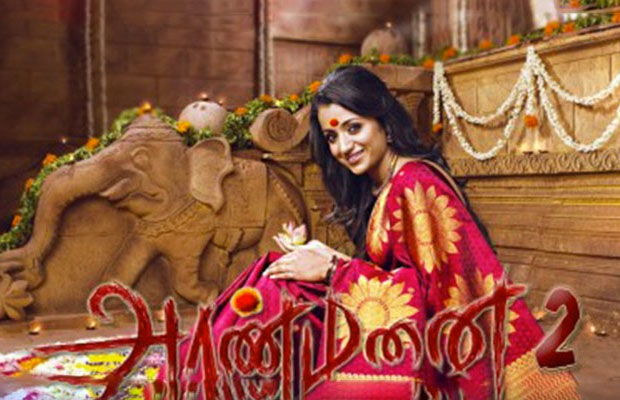 The much awaited horror comedy flick ‘Aranmanai 2′ starring two of South’s hottest actresses Hansika Motwani and Trisha Krishnan is making headlines for its new achievement. Reportedly the film’s team has worked hard for around 40 days to create an idol of Goddess Amman. The 103 feet tall statue will be the biggest statue of the Goddess which will possibly enter the Limca Book of Records if everything turns out well.

Directed Gururaj stated, “We had planned to create the scenes involving the statue of the goddess with visual effects, but we weren’t sure if it’d be as authentic as a real one. Hence, we decided to make a statue with plaster of Paris, skeletons and some other materials. We made the statue with lot of sincerity. Some of us even fasted for few days until we completed the task.” Well we surely hope the team’s dedication pays off!

Filmmaker Sundar C who gave hit comedy flick ‘Aranmanai’ starring Hansika Motwani is set to make the sequel for his film. ‘Aranmanai’ starring Hansika, Raai Laxmi and Andrea Jeremiah amongst others was a hit among the masses and hence director Sundar C has planned on releasing ‘Aranmanai 2’. This time the film will be starring actors Trisha and Siddharth in the lead role. Previously the actors have starred in films like ‘Nuvvostanante Nenoddantana’ and ‘Aayutha Ezhuthu’. Their onscreen couple is one of the most loved ones in southern cinema.

Hansika Motwani who has worked with Sundar C for two of his films namely ‘Aranmanai’ and ‘Aambala’ is currently working on her Tamil film ‘Vettai Mannan’. She will be seen in numerous films including ‘Vaalu’, ‘Romeo Juliet’, ‘Puli’ and ‘Durga’ this year. ‘Aranmanai 2’ is reportedly slated to release this December, 2015.