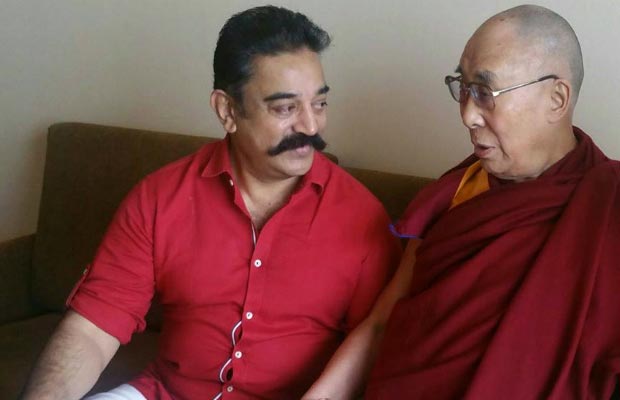 South star Kamal Haasan is on cloud nine after getting the opportunity to meet Tibetan spiritual leader Dalai Lama. After having a brief conversation with the noble person, the actor revealed some things that he has learnt, and might soon apply that to his forthcoming movies. Being a spiritual leader, Dalai Lama explained to Kamal Haasan that he has never watched movies, but believes that Haasan could use his gift and craft to spread the message of Ahimsa (non-violence) in India.

Kamal Haasan who recently starred in the action drama film ‘Thoongavanam’ met with Dalai Lama during the launch of Abdul Kalam Seva Ratna Awards. Dalai Lama was invited as a guest there to deliver a lecture on Human Approach to World Peace at the IIT Madras, as part of their Extra Mural Lecture series. Kamal Haasan took to his official Facebook page to tell us about his brief conversation with Dalai Lama, and what he has learnt from the same.

Kamal Haasan wrote, “Today morning I met The Dalai Lamaji. Have admired his resilience and purpose. Being a fan of Gandhi ji, it is not to too far fetched to become his admirer. Inspite of the fact that I am rationalist and hence not spiritually bent my meeting was invigorating and felt purposeful. My lack of interest in matters of things spiritual in nature was matched by his disinterest in cinema. “I have not watched a single movie not even television” he told me with a smile. Yet he opined that I could use my craft and medium to propagate the great philosophy offered to the world by India: Ahimsa. I confirmed my faith in Ahimsa and said I will venture soon in that direction.”

Does this mean we will soon get to see Kamal Haasan films with no more violence in it? Well only time will tell how his meet with Dalai Lama affects Kamal Haasan’s choice of movies in future.