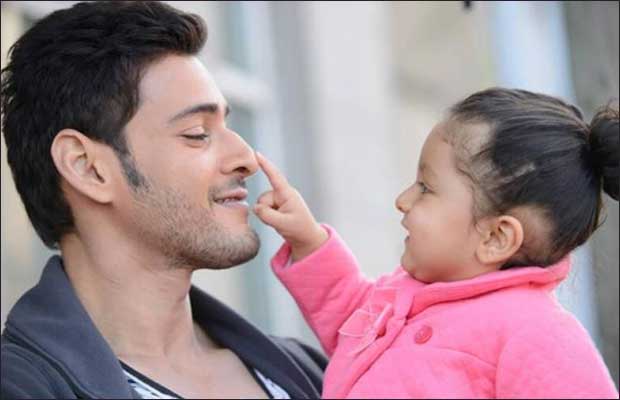 According to latest buzz, Telugu superstar Mahesh Babu‘s upcoming film ‘Bramhotsavam’ might star his adorable little daughter Sitara. The film has been created headlines ever since its inception and now once again Mahesh Babu fans have become eager to find out details about this talk that states Sitara might appear in the film. Apparently the makers are on a lookout for a little girl in the film, and it is said that Sitara seems to be a perfect match for the same.

While no confirmation has been made regarding the same, Mahesh Babu has not denied the news either. Sitara who is currently 4-years-old will make an adorable actress on screen and it would certainly be a delight to watch her in ‘Brahmotsavam’! Mahesh’s son Gautham Krishna had made his debut in father’s film ‘1:Nenokkadine’. Only time will tell if his little sister also follows his footsteps and debuts in her dotting father’s upcoming movie.

Also Read: The Cycle Mahesh Babu Rode In Srimanthudu Can Be Yours Now!

‘Brahmotsavam’ is directed by Srikanth Addala and produced by Prasad V Potluri of PVP Cinemas. Mickey J Meyer has given the music of the film. Edited by Sreekar Prasad,  Rathnavelu has done the cinematography. The film is scheduled to hit theaters on May 28, 2016. The film stars Kajal Aggarwal and Samantha Prabhu as the leading ladies. Other cast includes Pranitha Subhash, Jayasudha, Sayaji Shinde, Tanikella Bharani, Naresh and Krishna Bhagwan. It will be interesting to see so many leading stars of south industry together with superstar Mahesh!

Mahesh Babu who has had number of his Telugu films dubbed in Tamil is looking forward to finally doing a film in Kollywood as ‘Brahmotsavam’ is a bilingual film set to be shot simultaneously in Tamil and Telugu. It will be a cherry on the cake if his daughter Sitara in fact stars in the film along with the actor. Well we surely hope that happens, let us know soon Mahesh Babu!