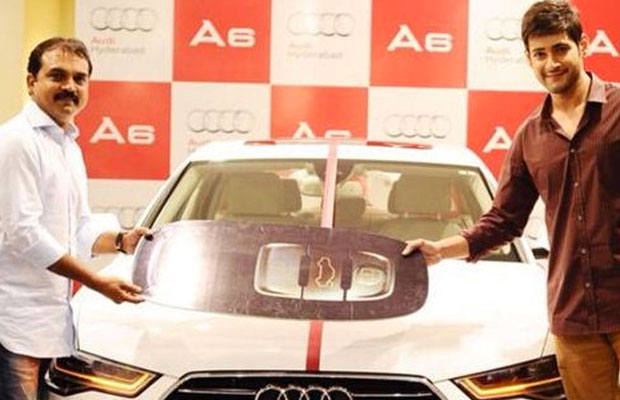 The superstar Mahesh Babu is not only an excellent actor, but is also a generous pal to his directors. The actor, who has an unbreakable record of giving super hit films, recently treated the ‘Srimanthudu’ director Koratala Siva with a pricey gesture.

Known as the super hit machine of Tollywood, Mahesh Babu gave another sprawling hit with his last ‘Srimanthudu’ directed by Koratala Siva. The actor is surely on cloud nine and wanted to grace the filmmaker with something unimaginable. Mahesh Babu along with wife Namrata Shirodkar gifted Siva an expensive car.

According to reports, it so happened that Mahesh and Namrata asked Koratala to accompany them to the Audi showroom. The couple then surprised the director with a brand new Audi A6. The actor wholeheartedly gifted Siva a pricey car to express his gratitude for the film ‘Srimanthudu’.

The film ‘Srimanthudu’ proved to be an extravagant hit for Mahesh Babu as it broke off his stereotypical image and portrayed him in a new avatar altogether. The audience can still not get over Mahesh Babu’s character in the film.  The film not only received laurels for its stars but the movie also won everyone’s hearts with its unique and out of the box story line.

After Mahesh Babu’s last two films before ‘Srimanthudu’ did not earn wide glories, ‘Srimanthudu’ surely brought back his lost charm. Directed by Koratala Siva, ‘Srimanthudu’ has successfully earned the title of the second highest grosser Telugu film after ‘Baahubali’. The Mahesh Babu starrer film earned a massive worldwide collection of over Rs. 200 crore.

Filmmaker Koratala Siva who was unaware of the humungous gift coming on his way took to the micro blogging site Twitter and posted, “Thank u @urstrulyMahesh sir and Namrata garu for such a lovely gesture. Really overwhelmed by ur love and positivity. Respect sir.”