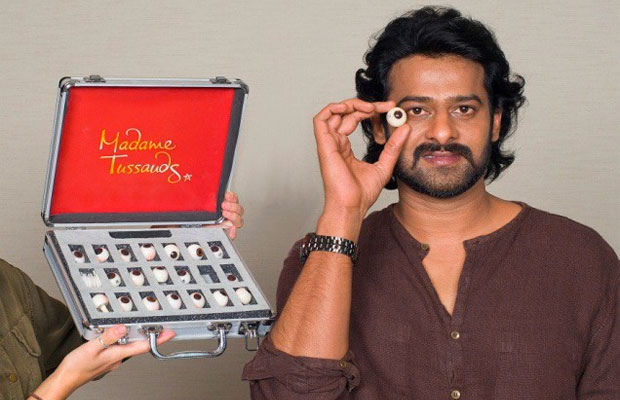 Prabhas the loved super star all over the place has been given a special place in the Tussauds museum in Bangkok. And he definitely deserved it.

News is that the actor was approached by the Tussauds museum authorities two months ago after which he underwent a sitting in Hyderabad with the artists during which 350 photographs were clicked and measurements taken. ‘Baahubali‘ star Prabhas will have his wax figure immortalised at Madame Tussauds, Bangkok. The actor has become a global name soon afetr the release of the much popular film Baahubali.

Prabhas said, “I am really happy to have been selected by Madame Tussauds. I’m also thankful to my guru, SS Rajamouli, for giving me the opportunity to work on this fantastic project,“

‘Baahubali‘ director SS Rajamouli took to his tweeter handle and posted, “Very happy to announce that Madame Tussauds is making a wax statue of our PRABHAS… First South Indian to be honoured thus. The statue will be unveiled at Bangkok in March 2017 and subsequently will be toured all over the world,” Rajamouli added.Prabhas’s statue will be in his Baahubali avatar at the Tussauds museum and will be placed in the movie room, alongside James Bond, Spiderman, Wolverine and Captain America.

The fans and the audience would really be happy knowing this fact as the actor has really worked hard. The actor became popular across India and in abroad after he starred in 2015 film “Baahubali: The Beginning“. The second part, titled “Baahubali: The Conclusion” which is set to release on April 28, 2017 next year.
.
Prabhas is set to join the liked of Shah Rukh Khan, Salman Khan, Amitabh Bachchan, Aishwarya Rai, Madhuri Dixit, Hrithik Roshan, Kareena Kapoor and Katrina Kaif whose statues are already installed at Madame Tussauds.

The actor whose favourite statue is of Mr. Bachchan also added “The look was finalised a week before the shoot. My first visit to Tussauds in Hong Kong was in 2013 but I had never imagined that I would be waxed in a statue,“ admits the actor.