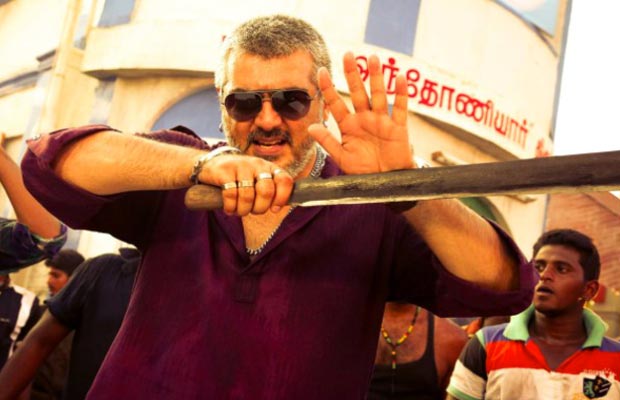 Tamil superstar Ajith, who hates using body doubles, has injured himself on the sets of his upcoming film ‘Vedalam’. The actor who was shooting some fierce action sequence on the last day of the shoot, apparently injured his right leg after attempting a very difficult stunt. The actor injured his right leg and was advised not to put any more strain on it, but despite all the advices, Ajith chose to take rest for an hour and finish his task. Now that’s why he is Kollywood’s bad*ss actor!

‘Vedalam’ director Siruthai Siva had suggested that the last day of shoot can be put off for the actor due to the injury. But Ajith who is always concerned about others more than himself simply took an hour’s rest and got right back to finish the fighting sequence. It is a very well known fact that Thala is among few of the stars who refrains from using body doubles. And his reason for the same is adorable, as he believes no one else should risk their life for him.

Well now that the film’s shoot has come to an end, Ajith can take ample of rest and recover from his leg injury. Apparently the actor had earlier also injured himself on the same spot during one of his film’s shoot. Surely that must have been an unfortunate Dejavu for the actor! However things have straightened up now as Thala is all well now. With this kind of dedication, anticipation for ‘Vedalam’ has increased twofold!

The title ‘Vedalam’ has probably been adopted from the famous Indian tale ‘Vikramaditya Vethalam’. Vethalam translates to Ghost in English which hints towards Ajith’s rough image in the film. Plot of the film has been kept under wraps. Much like Thala 55 that is Ajith starrer ‘Yennai Arindhaal’, Thala 56 – ‘Vedalam‘ has become a highly anticipated film already! The film also stars actresses Shruti Haasan, Laxmi Menon and actors Aniket Chouhan, Kabir Singh among others.