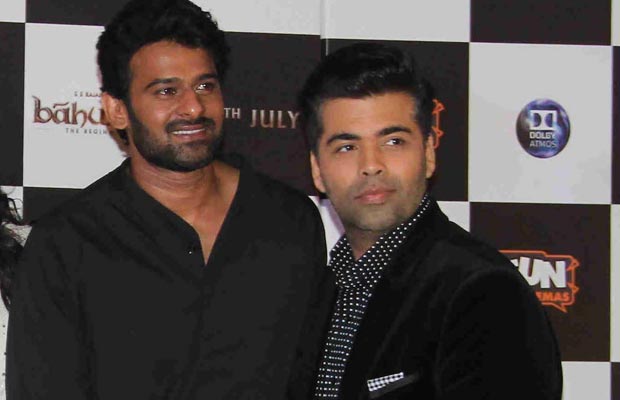 [tps_footer]Telugu star Prabhas is overjoyed after hearing another appreciating comment by filmmaker Karan Johar about his film ‘Baahubali’. The star has put in tremendous hard work for the film and is more than happy to be receiving the kind of response the film has been getting. Karan Johar recently tweeted after learning that ‘Baahubali’ has smashed all the TV rating records by getting 6.85 out of 10 in the TRP ratings. His reaction surprised Prabhas who was overwhelmed by all the love.

Karan had tweeted, “#Baahubali storms television ratings! More power to the man @ssrajamouli and the entire team!!! #Prabhas @RanaDaggubati” A source close to the lead star stated that Prabhas was pleasantly surprised and extremely delighted to see the announcement by Karan Johar. The actor is very humbled with all the love and appreciation he has been getting from the audiences. Currently he is busy gearing up for the second part of the film that has entered its pre production scale.

After the giant success of ‘Baahubali’, that raked in more than Rs. 600 crores worldwide, the filmmakers are all set to take the grandeur a notch higher in the film’s sequel. With a star studded cast being guided by ace filmmaker S.S. Rajamouli, we’re sure this Magnum Opus giant’s sequel will also prove to be as successful as the first part ‘Baahubali’. New additions to the film have yet not been made and it will certainly be interesting to see who the fresh faces joining the film will be.

After the mind blowing performance of the film’s first part that released on July 10, ‘Baahubali 2′ will soon start rolling and is expected to be released around June-July 2016. tar cast of the film boasts of an impressive lineup including actors Prabhas, Rana Daggubati, Anushka Shetty, Tamannaah, Sudeep, Sathyaraj, Nassar, Ramya Krishnan and Prabhakar. [/tps_footer]