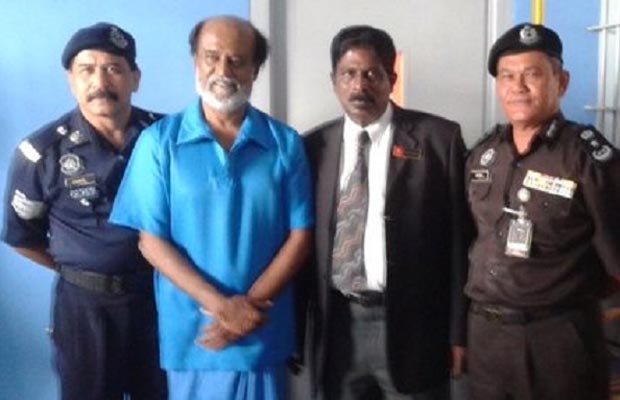 Tamil superstar Rajinikanth is now a prisoner at Malaysian jail, can you guess why? Well if you’re a true Thalaivar fan you would know by now that the superstar is currently in Malaysia shooting for his upcoming movie ‘Kabali’ in which he plays a double role. And for the very same reason Rajinikanth is shooting at a prison in Malaysia dressed up like a convict. We got our hands at this picture of him standing with prison authorities striking a pose in his convict getup.

Although the star can be seen wearing a lungi, which makes us think there’s a twist here somewhere. Thalaivar will be staying in Malaysia for a span of more than forty days which is quite a long time. The moment he arrived in the country, Rajinikanth received a warm overwhelming response by his fans as well as political figures of the nation. Internet has been going frenzy with Malaysian Rajini fans posting endless photos and videos of the superstar’s visits at several places in the country.

Rajinikanth was apparently welcomed by Malacca state Governor Mohd Khalil bin Yaakob and was invited for a special lunch at his place. The actor was accompanied by Kabali’s producer KS Thanu for the grand feast at the Governor’s place where many other political figures of the country gathered around to catch a glimpse of the superstar. And from the looks of it, the prison photo seems to be from Malacca as well.

Rajinikanth will be seen playing a double role in ‘Kabali’ and the new posters of the film see the actor in a handsome lean avatar. The actor will be seen as a Malaysian cop as well as an underworld don in the film. The amazingly talented superstar has shared screen space with many Bollywood beauties and the list is now increasing with ‘Kabali’. The film ‘Kabali’ will feature elegant actress Radhika Apte opposite Thalaivar.