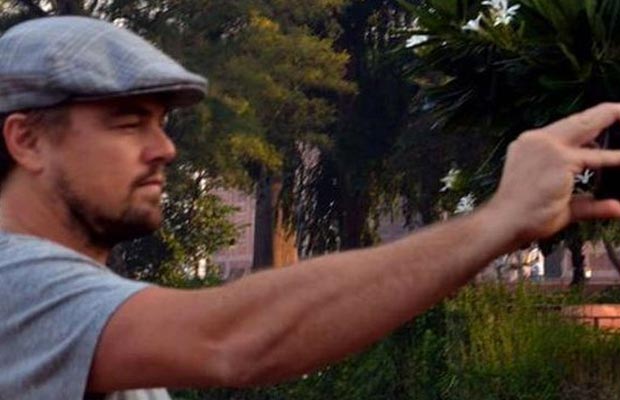 Hollywood star Leonardo DiCaprio, who is currently in India recently made a secret visit to Agra, to see Taj Mahal. The star did not want any kind of attention being drawn to him and thus took immense measure to keep his visit under the wraps. Apparently the actor hired an Indian guide to understand more about the history of Taj Mahal which is one of the seven wonders of the world. Leonardo reached the place early morning and left avoiding paparazzi hassle within few hours.

According to sources the actor reached around 7:15 am and left around 9:30. Leonardo DiCaprio was seen wearing a cap, black sunglasses to conceal his identity and was surrounded by bodyguards, who donned an all-black look. Apparently they were trying all measures to keep the visit low key as whenever someone tried to get close to Leonardo or tried to click his photographs the people were asked to leave them alone.

Well surely Leonardo DiCaprio is in no mood to make his visit to India a matter of public affair, but hey, what can we fans do to meet you Leo? The Hollywood heartthrob left for New Delhi, India, to attend a meet with Sunita Narain. The actor who has actively worked towards making Earth a better place is apparently in India for a new documentary based on Environmental hazards and the issue of global warming. Leo who had earlier produced and narrated the film ‘The 11th Hour’ is set to make something similar, and the actor will be staying around for four days to meet with Narain.

Leonardo DiCaprio has established numerous foundations for the betterment of society, where environmental sustainability has always been his number one priority. The actor has now and again addressed the matter of global warming on public platforms, and keeps doing his part as the representative of UN for peace and global climate change. Leo has also auctioned his personal assets several times to raise money for his foundation that is striving hard to make a difference.