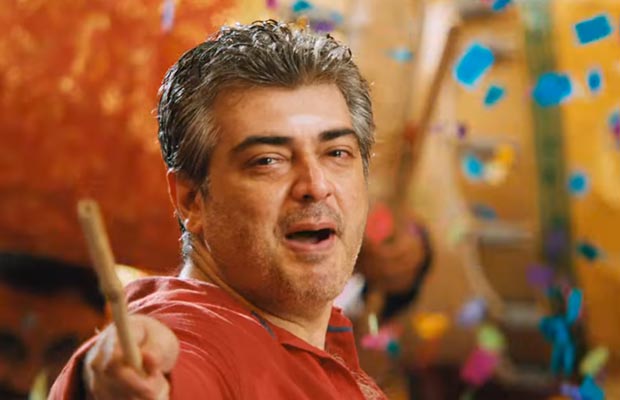 Tamil star Ajith is all set to rock his audience with the upcoming movie ‘Vedalam’, and a new teaser for track Veera Vinayaka is out. The small teaser gives us a glimpse of Ajith’s Ganpati puja celebrations that is energetic to the core. From whatever teasers we have seen yet, Ajith is totally winning over hearts with his child like enthusiasm in each song! After Aaluma Doluma teaser, we’ve got our hands on Veera Vinayaka teaser which is off the hook as well.

From the lyric videos released earlier we have all heard the high on energy tracks from ‘Vedalam’. The tracks released include Veera Vinayaka which is a track about Ganpati puja. The track has been sung by Anirudh Ravichander and Vishal Dadlani. Music director Anirudh has put his heart and soul into making every track fantastic for a star like Ajith. Veera Vinayaka has been penned by Viveka who has done a stupendous job keeping the spirituality of the festival intact.

The small teaser clip shows celebrations all around where Ajith can be seen breaking a leg on the catchy tunes. Actress Lakshmi Menon who plays the role of Thala’s sister in the film is also seen dancing merrily in the teaser video. The Ganpati idol used in the video is charming and beautiful as ever, which makes us reminisce the festival that passed by few months ago. All in all we’re in love with the teaser and cannot wait to see the music videos for all these tracks!

From all the lyric videos and teasers one thing is clear, ‘Vedalam’ will see many different sides of Ajith in it. From a caring protective brother, to a crazy psychopath and also a romantic lover, Thala is going to do it all in the film! After all this hype we are waiting to get our hands on the film’s official trailer, to get more insight about the film’s storyline. Till that time, bump the music from ‘Vedalam’ and enjoy Thala fans!