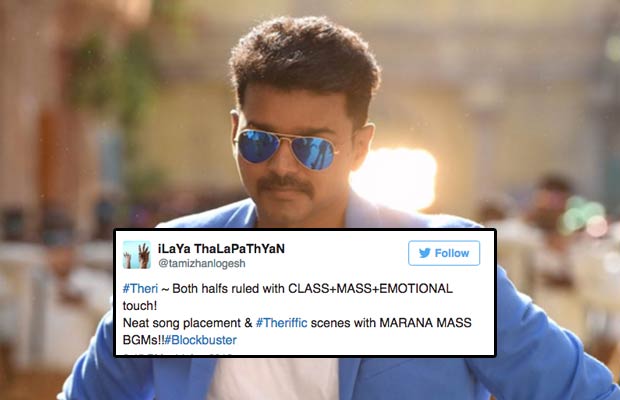 [tps_footer]Vijay-starrer “Theri” has opened to fairly positive reviews and is currently trending at the top on social media. After much of hype and popularity, the film has released today, resulting in a positive response by the fans. The action thriller film has been written and directed by Atlee Kumar and is ruling everyone’s hearts with its emotional storyline.

Well, this couldn’t be a better way for Vijay‘s fans to celebrate Tamil New Year. The film showcases the importance of raising children and making them a responsible citizen of the country. The story is about a good father Vs bad father. Vijay plays the role of Joseph Kurvilla an honest cop who changes his profession due to personal tragedy. Samantha plays his wife Mithra, a doctor by profession.

The film features Vijay, Samantha and Amy Jackson in the lead roles while Prabhu and Raadhika Sarathkumar amongst others from an ensemble cast.

Check out the audience review of Theri: