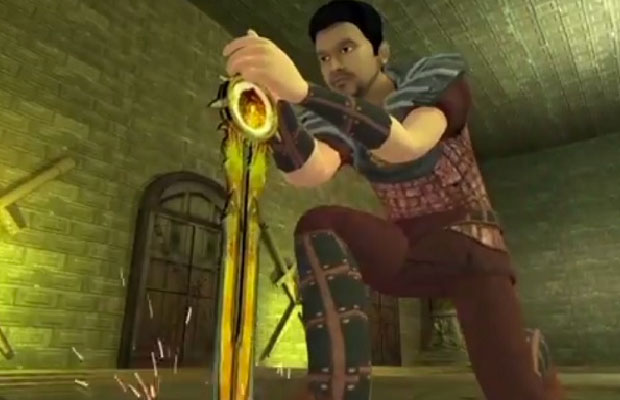 The makers of Vijay’s adventure fantasy drama ‘Puli’ have teamed up with the same videogame making team who made the latest game for Akshay Kumar’s ‘Gabbar is Back’. The 3D game starring Vijay as a warrior will be released today and the trailer for the same was released recently. The 3D game named ‘Puli Official 3D‘ will be available on game stores of Google, Apple and Microsoft.

Vijay’s ‘Puli’ has been creating a buzz ever since the film was first initiated. Being an adventure fantasy film, ‘Puli’ has a wide target audience from kids to adults. And now with the latest videogame, young Ilayathalapathy fans are surely going to be overjoyed! Looking at the trailer, the video game seems to be quite impressive with fine graphics used. According to the makers it is India’s first ever strategy based game in the history of Indian cinema.

Much like its game, ‘Puli’ is a promising film with the finest graphics used by the film’s team. The first and second trailer of the film give us glimpses of epic use of VFX which is taking Indian cinema to another level. The trailer shows amazing graphics at many places but what especially caught our attention were the graphics that were used to show the animals in the film. With sheer perfection and neatness, the film’s VFX team has pulled off something that many in the industry struggle to achieve.

‘Puli’ starring Tamil superstar Ilayathalapathy Vijay boasts a star studded cast of veteran Bollywood actress Sridevi, actress Shruti Haasan, Hansika Motwani and Kannada star Sudeep Kiccha. The film also stars actors Prabhu and Nandita Swetha in pivotal roles. Directed by Chimbu Deven, Sibu Thameens and PT Selvakumar have produced ‘Puli’. The film (shot in Tamil) will release later this year in Tamil, Hindi and Telugu. Although there were some problems with the film’s release date, ‘Puli’ is all set to hit theaters on October 1, 2015. Are you ready to play the Puli Official 3D?