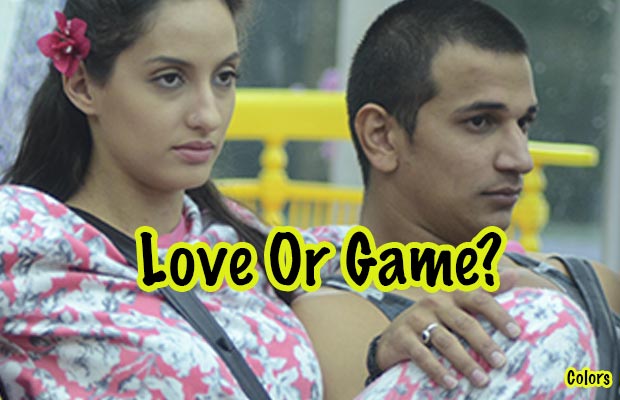 [tps_footer]Since Nora Fatehi has entered Bigg Boss 9 house as a wild card contestant, Prince Narula has been getting closer to her and away from other housemates. All the housemates have been gossiping that how Prince is spending time only with Nora in the house and not with them.

Nora and Prince’ affection for each other has started bothering everyone. The housemates were heard talking how Nora’s love for Prince looks fake and that she is creating love angle for the sake of the game.

As in the last episode, we also saw how Nora had an argument with everyone for accusing and portraying her vulgar with Prince. It all started after Priya Malik revealed all the secret gossips of the ‘cool group’ to Nora Fatehi.

Well, after the ugly fight and argument, this morning Priya once again poked Nora on how ‘cool group’ was gossiping about her and Prince’ physical proximity. Again Nora got violent and louder on the same issue.

Nora started raising her voice by saying that it should not be anyone’s business if she is doing anything with Prince. She also stated that it was not because of her that Prince took a step back for not spending time with his friends and also to play his game.

Later, Prince and Suyyash were seen talking on the same issue. Suyyash makes prince understand that what Nora is doing is not right and that it’s spoiling his efforts to play the game that he has been playing since day 1.

To which prince replied saying that he would not sit with Nora now onwards and that he would be with Nora only when everybody is sitting in a group. He also stated that he wants to test Nora’s feelings are true or no for him and that he can when he would start nominating and play the game with her on the show.

Well, do you think this strategy of Prince will help him to be normal with his cool group once again? Will Prince be able to test the true feelings of Nora now? Time will tell better!