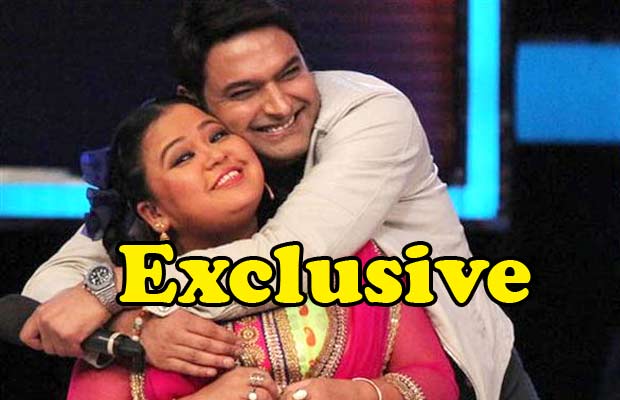 [tps_footer]Laughter Queen Bharti Singh aka Lalli who is currently hosting the new show ‘Comedy Nights Live‘, speaks up on her friendship with Kapil Sharma and that how people are trying to portray everything wrong. In an exclusive chat with Business Of Cinema, Bharti also revealed on her marriage plans and much more.

“Be it a negative or positive publicity, audience is watching it. I am feeling very bad that why people are thinking us wrong. If not us then someone else would have taken over the place because channel did not ask to shut the show, they have decided to do it. Someone will obviously do it and I feel so good to see how our innocent audience get attached to one person (Kapil Sharma) and its great to see so many fans of Kapil bhai. In fact I am also a fan, a student. During college times theatre and rest I have learnt from him. I love Kapil, he is like a brother to me. People think rival show has started so we might not be talking with each other, but in real we keep meeting, going to each others place, we have traveled to Amritsar together which people aren’t aware about. We are not India Pakistan. Never mind, people love smiling and laughing and slowly slowly everyone would change.”

Any differences or bitter friendship with Kapil after taking over his show?

“We are still friends and when people ask me, I clearly say there are no differences between us. We are from the same family and is it, that, if brother and sister work separately, they don’t talk to each other? There is nothing such, people have made it a big issue. It’s actually good his film is working, he has his production house..its good he is thinking about his future. Kapil bhai is very much talented and the talented person should never worry about anything. Talented person can never go flop. If not here, he can do better at some other channel and if not there, he will do better in films.”

Have you talked to Kapil after the show started?

“Actually my film Sanam Re is releasing soon and I was very much busy with it, as I returned back from Canada, I got to know two three days before about the new show and between all this couldn’t talk to him. But, I am going day after tomorrow to meet him. If anything would have gone wrong, Kapil’s message would have immediately come saying that I am doing this thing wrong. But he has not done anything such. People imagine that such things are happening but there is nothing such between us. People are continuously posting tweets and messages on social media, but its not making any difference to us neither to Kapil Sharma.”

Kapil has won loyal fans through Comedy Nights With Kapil, can you think Comedy Nights Live would be able to show the same magic?

“I can’t say anything right now as we have done only one episode yet. We won’t be able to fill the place of Kapil ever…if we can’t give audiences laughter at least we can give them smiles and when smile would turn into laughter nobody knows. We are taking best efforts to get our audiences’ love, respect and if we would have not done this show, someone else would have done it.”

Why same concept as CNWK? Didn’t think of coming up with something new?

“Right, but its all in the hands of production house…we are just artists and bigger than us, its channel. Channel has approved that they want same settings on how some new family has come on lease and such. Well, people love Kapil Sharma so much that they made me his son Chintu and that’s how I became Chintu Sharma so that I keep talking about my father (Kapil). I will come up with more characters, but the role of Chintu Sharma will always be there on the show.”

CNWK team’s member has expressed a disappointment on snatching all the stars on Comedy Nights Bachao show.

“Person who thinks such is actually upset on the same and not Kapil Sharma. As I earlier told you, talented people never need to get upset. If some other fat lady is replacing me, will I get upset? What my talent is, it will be. You should be afraid if you are not talented.”

There are comments on Krushna doing cheap comedy whereas  Kapil does classy comedy.

“People have their own taste. There are types of audiences and they are like mixed fruit platter. People love good comedy and also naughty comedy. Everybody has its own audience and its not like a film that you pay 500 Rs and forcefully watch it. You have remote, if you think its cheap comedy, change the channel. Loyal fans are watching, We have also got positive response. We actually don’t react to it.”

Any wishes for Kapil’s new show?

“I have loads of wishes for him. I wish more than Comedy Nights Bachao, his new show should be a success. We love him a lot and we can’t stay without watching him on television. We are badly waiting to see him back because he is my brother first and then Kapil Sharma.”

How did Salman Khan suddenly arrive on Katrina and Aditya’s Fitoor promotions?

“We were all shocked to see Salman Khan. Suddenly audience started shouting. Salman then said that he was shooting here and thought to meet Fitoor cast as they are here for promotions. He was in a tracksuit. He didn’t shoot for the episode. Just arrived, had a talk with us and left immediately within 5 minutes. We actually wanted to shoot a piece with him because it would have been a big honour for us.”

Looking at the leaked pictures, people thought they will get an opportunity to see Salman and Katrina again after Bigg Boss

“Do you think Salman Khan will come to anyone’s show like this? He just told us that after his shoot pack up, someone told him Fitoor cast is here and that’s how he came to meet them. He was very much easy…didn’t even wait for 5 minutes.”

Bharti when are you planning to get married as people are wanting to know after your engagement rumours were doing rounds.

“OMG! People have done big foolishness…until and unless you don’t listen to me talking on TV, do not believe. People can write anything they want to…you can never trust them. When you will see Bharti standing in front of the whole crowd holding mic saying yes I’m getting married, then you consider it’s true and frankly, then you all can call me and wish me for my marriage.”

But what about the photos saying Bharti is engaged?

“Please open my Instagram, I have pictures with many actors with whom I work daily. So does that mean I would marry all of them? He is my writer who writes for me since 6 years. If you would have been my writer and if i would have travelled with you everyday because our routes are same or being with you on shoots and discussing with you… does that mean there is something brewing between us?

People are thinking very wrong. It’s been 7 years since I came to Mumbai from Punjab, but I still feel people’s thinking is still very narrow minded. I don’t need publicity, I’m very famous because of my work, from elder person to young child, everyone smiles when they see me. Even if I take an international flight, people get happy to see me and ask me, “Bharti will you crack some jokes?”. In this stressful life if I’m making someone laugh for 1 hour it’s a very good thing. Its very negative that without asking people print out anything. Ask before you publish because I’m not among those girls who won’t reveal anything about me.”

“Getting married is not a bad thing, but running away with someone is a bad thing. Weird weird things were written about me, I didn’t even feel to react on it. Some online portal wrote Bharti was spotted kissing her boyfriend in car. If i want to kiss someone why would I kiss in car. Am I a college girl? I didn’t even react to those cheap stuff written on me. Bharti Singh who shuts everyone’s mouth, do you think she will kiss someone in a car? If I will marry, I will let everyone know. I felt so bad about the rumours. In fact I reveal that I have planned to marry in 2018, but with who I’m getting married even I don’t know. It’s been 6 years, I am bindaas, and nobody has dared to break Bharti Singh.”[/tps_footer]