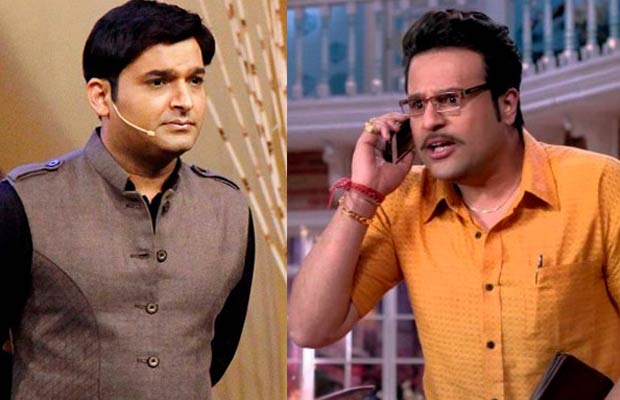 [tps_footer]Comedian turned actor Kapil Sharma along with his ‘Comedy Nights With Kapil‘ team announced new comedy show ‘The Kapil Sharma Show‘ today. Looking at the promo, it seems Kapil Sharma is all set to make a huge comeback and will once again win everyone’s heart.

The much-awaited show, which was announced today, will be telecast on Sony TV channel every Saturday and Sunday at 9 pm from April 23. At the press conference, Navjot Singh Sidhu revealed that intentionally 9 pm slot has been selected to avoid clashing with Comedy Nights Live and Comedy Nights Bachao. Navjot Singh Sidhu also confessed, “The comeback is a greater challenge. We have to live up to our own standards.”

Kapil Sharma also revealed that they are not competing with Krushna Abhishek and Bharti Singh‘s shows as they have different concepts. “I have seen Comedy Nights Live, they have a different concept,” said Kapil at the promo launch event.

When asked about his competition with Krushna Abhishek, Kapil responded saying, “If you are doing your best, there’s no need to differentiate.”

Well, Kapil Sharma had maintained silence over his rivalry with Krushna Abhishek since his show was shut and replaced with new name Comedy Nights Live. Moreover anything its great to see how Kapil managed the entire situation since his show went off air.

As they say, ‘good things come to an end”, but moreover anything, its time to cheer up and wait to see Kapil Sharma back on the television as he has returned back again with a bang.[/tps_footer]