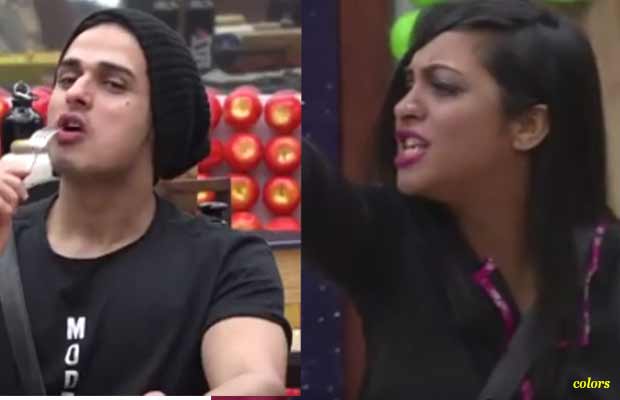 Bigg Boss 11 contestants Priyank Sharma and Arshi Khan once again get into an ugly fight.

The reality show Bigg Boss 11 is all about dirty games, politics, fights, arguments and much more that needs to keep the show entertained for the viewers. Tonight’s episode will see another ugly fight between Arshi Khan and Priyank Sharma. It all starts after Priyank provokes Arshi saying that he has yet not revealed anything about her and that he knows every inside story about her. This irks Arshi Khan and the two get into a dirty argument.

Arshi starts making personal comments while Priyank keeps smiling in order to irk her. Arshi also asks Priyank to spit on her if he has guts while Priyank asks her to hit if she has guts to do so. Arshi goes mad over Priyank Sharma’s few statements. She goes uncontrollable and requests Bigg Boss to call her in the confession room.

Earlier, Priyank had talked about Arshi Khan’s past in the house, which had created a huge ruckus. Salman Khan slammed him for bringing out negativity in the house. Arshi Khan’s publicist Flynn Remedios had then filed FIR against Priyank, makers of the show and Sapna Choudhary for telecasting Arshi’s personal legal cases on the TV.

It’s Arshi Khan vs @ipriyanksharmaa in the #BB11 house once again! Find out what will happen next tonight at 10:30pm! #BBSneakPeek pic.twitter.com/RXOXq94l2o

Watch Video:Bigg Boss 11: Priyank Sharma And Arshi Khan Get Into Ugly Fight Like Never Before