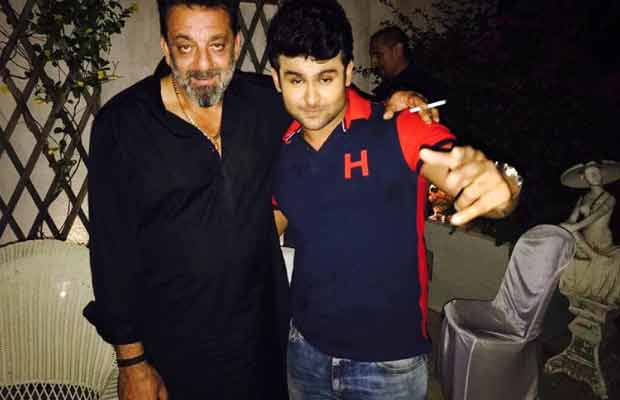 Dr. Sanket Bhosale is a famous mimicry artist and comedian, but he is best known for his impression of Bollywood actor Sanjay Dutt.

He is also a part of the famous The Kapil Sharma Show and the way he mimics Sanjay Dutt leaves the audience dumbstruck. Sanket’s videos are well appreciated on Youtube and Facebook as well.

Recently, Sanket met Sanjay Dutt and posted a picture on Facebook. Among many, one picture was captioned,

(Sanjay Sir said “You are my son” and hugged me)

Sanket also mimicked Sanjay Dutt in Dutt’s presence and shared a video. While Sanjay Dutt fell short of words, all he could do is smile. Shekhar Suman and Adhyayan Suman can also be seen in the video.

Sanjay Dutt will be sharing screen space with Shekhar Suman in his upcoming film Bhoomi.

Dr. Sanket Bhosale has also been giving lessons to Ranbir Kapoor for his upcoming film which is Sanjay Dutt’s untitled biopic. Sanket is so good at mimicking Mr Dutt that he director of the film Rajkumar Hirani thought he would be a perfect mentor for Ranbir and guiding him in perfecting Sanjay Dutt’s role.

Dr. Sanket Bhosale also has a show titled Baba Ki Chowki on MTV Beats, in which he is Baba (Sanjay Dutt) and interviews Bollywood celebrities for their upcoming movies.

There is no doubt that Dr.Sanket Bhosale is a house of talent and is making it big with his hard work. Way to go Sanket !