Aamir Khan and Virat Kohli have come together for a candid conversation on the Secret Superstar chat show.

The Bollywood actor Aamir Khan is coming with the film Secret Superstar, also starring Zaira Wasim. He is currently on a promotional spree for the film and for the same, a chat show on the film’s name has been organized. Interestingly, one of the celebs to join Mr Perfectionist on the show is the cricketer Virat Kohli.

Aamir has flown down especially for one day from Singapore to shoot this special chat show on 3rd October. The actor will leave on 3rd night itself to resume promotions of the movie.

It will for the first time ever that the audience will get to witness Aamir Khan and Virat Kohli at their candid best, each one ready to bare few secrets.

Both the stars were spotted in a casual look on the show. Khan was spotted in a grey tee and grey pants with black shoes. On the other hand, Kohli was wearing a white-grey striped tee paired with black pants. 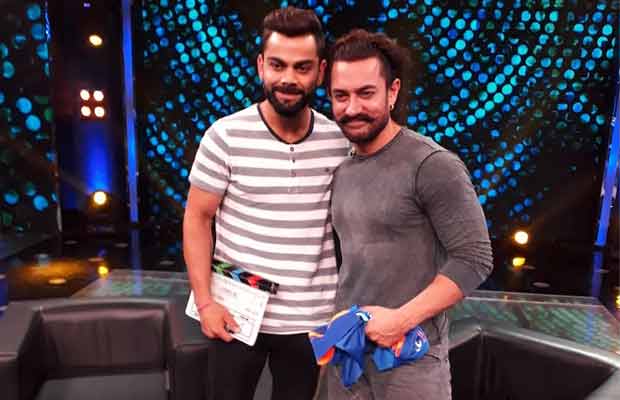 Aamir and Virat are both bigwigs in their fields. Virat Kohli is known to be media shy. Hence it is going to be intriguing to get a window into his life. On the other hand, Aamir Khan’s quick wit has always enchanted the audience. Thereby a chat show between the two is going to be must watch for all.