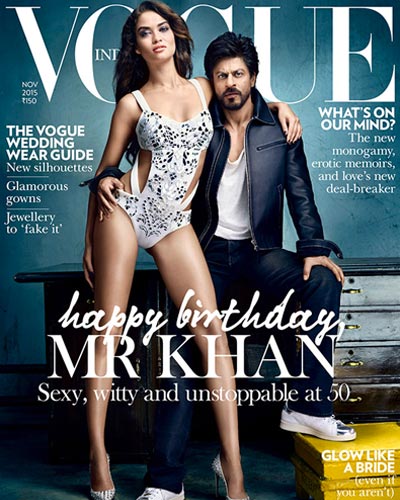 The world, the nation and every corner of our country knows who Shah Rukh khan is. SRK is one super star who has worked for 25 years of his life and has finally earned so much fame, name and stardom that every child, every girl and every man knows him. On this 2nd of November this handsome hottie turns 50, yes can you believe it, he will be a half century old. The looks, the style and the attitude that the star emits makes it unbelievable for us to believe that he will be 50 soon.

We recently came across the steamy and s**y cover photo shoot featuring SRK where we just cannot take our eyes off him. We see him wearing dark blue denims paired with white tee and a smart leather jacket. The star is looking dashing and awesome even when wearing the simplest of clothes and flaunting an easy breezy hair look. The model whom we see sitting on his lap is none other than the Victoria Street model Shanina Shaik who had specially flown down to make it for the pictures between 9pm and 3am which was the only free time the actor could spare for this shoot.

Bollywood’s King Khan, Shah Rukh Khan, who is currently very busy shooting for his upcoming film Dilwale, by director Rohit Shetty, will also be seen in Fan and Raees. One of the most awaited films of the year ‘Dilwale’, is right on schedule. The masses are already getting restless to see Kajol and SRK share screen space in the film ‘Dilwale‘. The two top actors, who are labeled as the most romantic on screen duo of B-Town, were paired together in ‘My Name Is Khan’, but this time the audience is expecting the magic of DDLJ to be recreated on screen.

Well we wish our bollywood hunk and dashing Superstar an Advanced Happy Birthday.