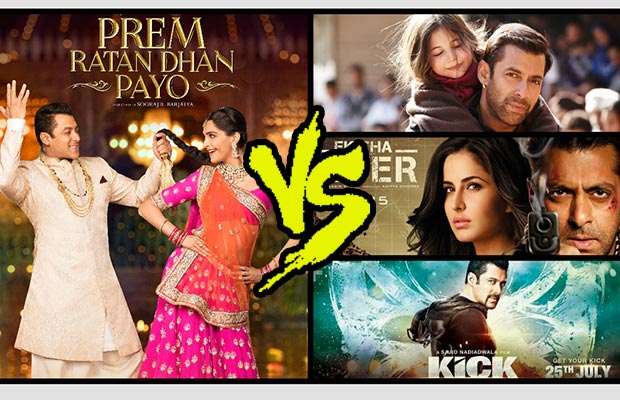 Bollywood’s latest release ‘Prem Ratan Dhan Payo’ starring Salman Khan is shattering all records, but is it the actor’s best film till date? The film has received massive response owing to the major holiday factor, and number wise it is surely performing better than Salman Khan‘s previous films. But taking away the holiday factors and the hike in ticket rates, it would appear that ‘Prem Ratan Dhan Payo’ is last in the race compared with other Salman films over the past few years.

‘Prem Ratan Dhan Payo’ which is a family oriented film has numerically left films like ‘Bajrangi Bhaijaan’ behind. But in terms of enthusiasm among the audience, the film is lagging behind Salman Khan hits like ‘Ek Tha Tiger’, ‘Kick’, ‘Dabangg’ and ‘Bodyguard’. Which is mostly because the action genre films are preferred more than drama oriented films by the audience. If the past Salman starrer films were to be ranked it would be something like this – ‘Ek Tha Tiger’, ‘Dabangg’, ‘Bodyguard’, ‘Kick’ and then ‘Bajrangi Bhaijaan’ and ‘Prem Ratan Dhan Payo’.

‘Prem Ratan Dhan Payo’ has experience slack in the morning shows on its first day as compared to other Salman Khan films which showed much more enthusiasm from the audience to catch the film on its first day first show. However the slack was covered later in the day, but that is only due to the major holiday factor of Diwali. Had the other Salman Khan films released on this date with the ongoing ticket rates, the box office performance would also have surpassed that of PRDP.

PRDP directed by Sooraj Barjatya starring Salman Khan and Sonam Kapoor in lead roles has however achieved the biggest opening day ever leaving films like ‘Happy New Year‘ behind by a small margin. ‘Prem Ratan Dhan Payo‘ has raked in Rs. 39 crores net approx on its first day, and now we wait to see how the film performs once the holiday factor dies down.