Irrfan Khan is one of the most versatile artists in our film industry. He has lined up projects that are coming up this year. Including a few of the most intriguing ones like, ‘The Song of The Scorpions’ with Golshifteh Farahani. ‘Hindi Medium’ starring beside Saba Qamar, along with an untitled film he is working for, directed by Tanuja Chandra.

The film is said to be a romantic travelogue which is reportedly claimed to have a new look for Irrfan. The shoots have been wrapped up at Rewari, Bikaner and Hrishikesh. It has now moved over to Gangtok, and then to finally arrive in Mumbai. The shoot should complete by the month’s end.

As for his recent shoot location, Gangtok, doesn’t have much exposure to Bollywood films. Irrfan got an opportunity to meet the people and visit the places in Gangtok. Through this untitled film, the response from the people was overwhelming.

Such a happy crowd in Gangtok!!!Crowd celebrating me , I’m celebrating the crowd pic.twitter.com/lSq9nuJ5He

Despite not really being an active filming zone for the Bollywood industry, Gangtok welcomed Irrfan and the team with a stunning crowd, which took the cast by surprise. The people who embraced him and had gathered for Irrfan when he had arrived, and they knew about his contribution to the film industry globally, even when Bollywood films aren’t much accessible in the region, and were a enthusiastically pleasing crowd.

They had been waiting for him, to just have a glance, clearly indicating that Irrfan has been really influencing people worldwide with his skills and passion on screen and off-screen and there is no place where his work hasn’t reached out to. 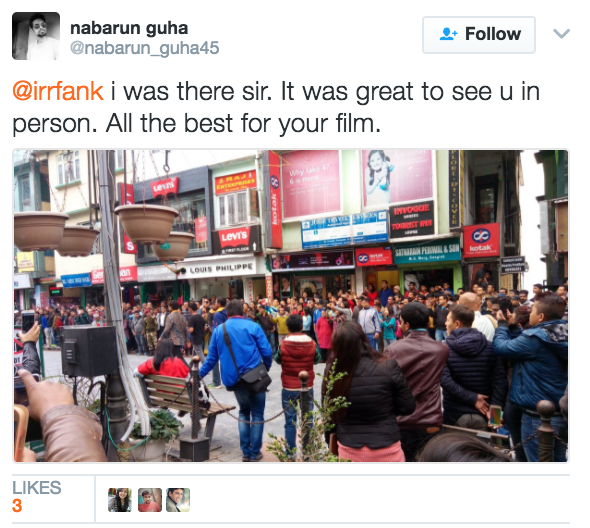 Irrfan was tongue-tied when he was welcomed by such an amusing crowd. He said, ”The welcome in Gangtok was fantastic. In a place where access to movies are very limited and then to see such response was great. Much like the place, the people of Gangtok are wonderful and beautiful.”

Also Watch: Salman Khan’s Brother Arbaaz Khan Opens Up On His Link Up With This Rumoured Girlfriend!