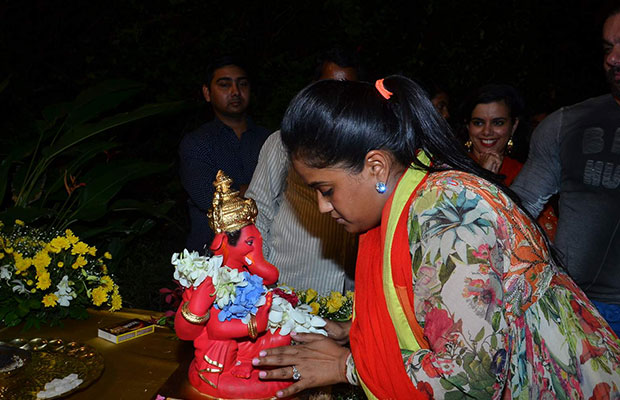 [tps_footer]Last year, Salman Khan’s sister Arpita Khan’s big fat wedding with Aayush Sharma was a talk in the tinsel town. The amazing couple tied the knot last year and since then the duo is happily married. Both Aayush and Arpita are often seen going on holiday trips with their close friends.

Celebrating each and every occasion with the Khan family, Arpita Khan Sharma and Aayush had a wonderful Ganpati celebrations this year at the Galaxy Apartment. The adorable couple was spotted celebrating Ganpati with their entire Khan-daan in a great fervor. But well celebrations don’t stop there, according to the reports, it is said that Salman Khan’s sister Arpita is pregnant.

Reportedly, the couple is expecting their first baby in the first quarter of 2016. Moreover anything, we wonder how happy and excited Salman Khan would be who is all set to turn ‘Mamu’ once again. We all know Salman’s love for kids and is often seen expressing them through his pictures with them.

We wish the couple and the entire Khan family a happy and prosperous life ahead for their upcoming little bundle of joy.

Arpita and Aayush were dating each other since 2013 and taking their relationship one step ahead, the duo planned to marry each other in 2014. Actor Salman Khan‘s sister Arpita married businessman-aspiring actor Aayush Sharma in a lavish wedding on November 18 in Hyderabad’s Falaknuma Palace. The big fat wedding was witnessed by more than 200+ guest including Bollywood biggies.

Meanwhile, Salman Khan is shooting for his much awaited film ‘Prem Ratan Dhan Payo’ and is also making headlines for his upcoming controversial reality show ‘Bigg Boss 9’. Despite of having busy schedules we are sure Salman Khan would get some time soon to be part of happiness and celebrations along with his brothers Arbaaz and Sohail and the rest of the family.