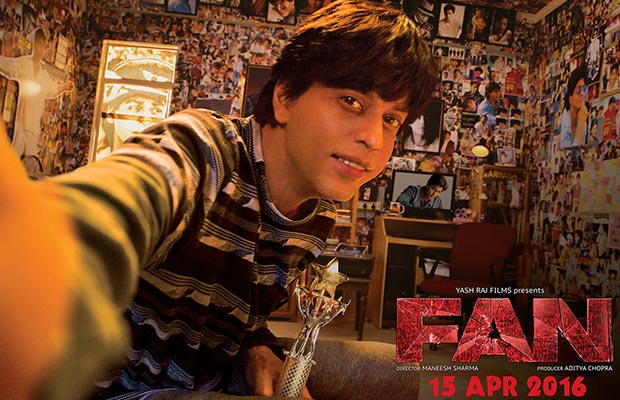 The teaser of the film ‘Fan’ has impressed the masses a lot. The film which will showcase the life of the biggest fan of Aryan Khanna is highly anticipated by the audience. The newly launched poster speaks volumes about the grandeur of stardom and also features the prominent character of the film Gaurav taking a selfie.

The poster is one of a kind featuring Gaurav taking a selfie with the numerous posters of his idol. Shah Rukh Khan’s avatar as Gaurav is surely imaginable and makes us all the more curious about the film. The VFX and the realistic touches, make Gaurav an exact replica of the superstar.

The film ‘Fan’ will see Shah Rukh Khan playing his own biggest fan. The movie is directed by Maneesh Sharma and also has the bits and glimpses of SRK’s real life achievements. The story is an emotional take on how Gaurav chases and follows his idol. The mesmerizing poster surely is enough to make the audience craving for more.

Shah Rukh Khan shared the teaser of the film on his birthday and the fans are all the more gaga over the same. The film not only will depict the life of the biggest superstar but will also showcase the enthralling details of the life of his biggest fan.

Shah Rukh has once again proved that he can fit in the shoes of any character effortlessly. Disguising himself as Gaurav, one can surely expect the movie to be full of realism and surprises. Must say, King Khan never fails to impress his fans with something unique.

The audience can hardly wait to witness the stardom and the struggle of a fan. The movie is scheduled to hit the screens on April 15th, 2016.