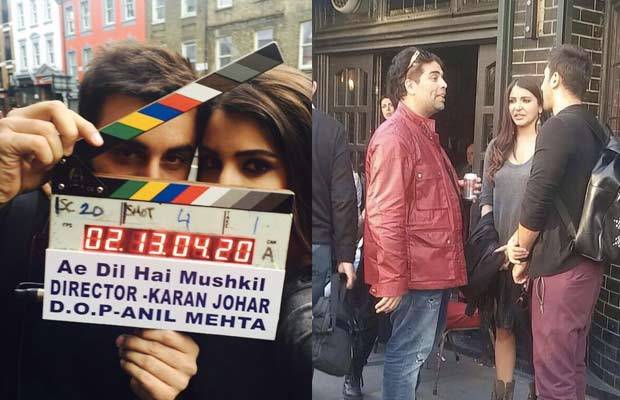 Karan Johar’s upcoming directorial ‘Ae Dil Hai Mushkil’ is right on schedule. The film featuring Ranbir Kapoor, Anushka Sharma and Aishwarya Rai Bachchan has finally wrapped up its first shooting schedule. The film which will see the most unusual star cast is said to be a love story which will depict a new perspective on relationships and heartbreaks.

Ranbir and Anushka have shared screen space earlier too but the surprise element will surely be beautiful actress Aishwarya. After a break from the silver screen due to family commitments, Aishwarya made her comeback in the tinsel town with the film ‘Jazbaa’, the former Miss World will now be seen in Karan Johar’s ‘Ae Dil Hai Mushkil’.
It is also for the first time that Karan Johar is teaming up with Aishwarya. The filmmaker is all smiles for the actress and is also impressed with her hard work and dedication. Karan Johar was also heard sharing that he wanted to cast Aishwarya in his earlier films but nothing shaped up.

The movie ‘Ae Dil Hai Mushkil’ is surely going to be a picturesque one as it will be shot in the scenic locations of London, Paris and other parts of Europe. The film went on floors in September this year with Ranbir and Anushka and later, the team was joined by Aishwarya in October. The reason why Aishwarya joined the cast later was because she was tied up with her film ‘Jazbaa’.

Karan Johar took to the micro blogging site Twitter and posted a picture captioning it, “Wrap on our first big schedule on #AeDilHaiMushkil….the best crew ever!!!! Had so much fun….thank you to all….”

‘Ae Dil Hai Mushkil’ is scheduled to release next year during Diwali.