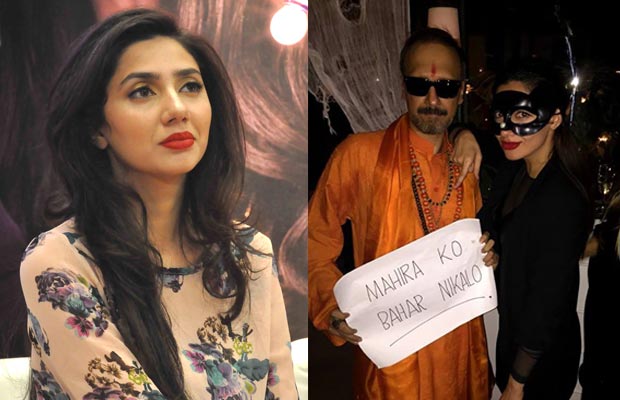 Mahira Khan is surely climbing the success ladder rapidly in the Bollywood industry. After gaining a huge fan following with the TV show Humsafar opposite handsome hunk Fawad Khan, Mahira Khan has filled her kitty with Shah Rukh Khan’s ‘Raees’.

The highly talented actress Mahira was much in limelight since her television appearance, however, the beautiful diva gained all the more eyeballs after she was signed opposite Shah Rukh Khan for the film ‘Raees’. Well, even though Mahira’s career is reaching new heights, the girl has landed into some political glitch.

Also Read:Shah Rukh Khan To Pakistan’s Mahira Khan: Uff We Will Look Good In Raees Too

Apart from the film ‘Raees’, Mahira seems to be making news for something else too. Recently, the Shiv Sena announced a ban on Pakistani actors which included actors Fawad and Mahira. The political organization strongly opined that these actors should be banned from entering Maharashtra. After receiving loads of criticism for their act, actress Mahira seems to be taking matters in her own hands.

On the eve of Halloween, Mahira posted a picture of hers on the social networking site Facebook along with director Asim Raza. While Mahira dressed up as a sensuous cat woman, Asim was dressed up as Bal Thackeray holding a card displaying, “Mahira Ko Bahar Nikalo”.

Not being bogged down by the ban, Mahira seems to be in a mood of protest. Khoobsurat actor Fawad who has now gained huge fan female following in the country, was also targeted for his nationality. However, the handsome hunk seems to be unaffected by the criticism and is bagging huge films in his hat.

Coming to the cat woman Mahira, the actress will soon be seen in Rahul Dholakia’s film ‘Raees’ opposite SRK. The film will see Shah Rukh Khan in a new avatar altogether and will also see Mahira entering the tinsel town.