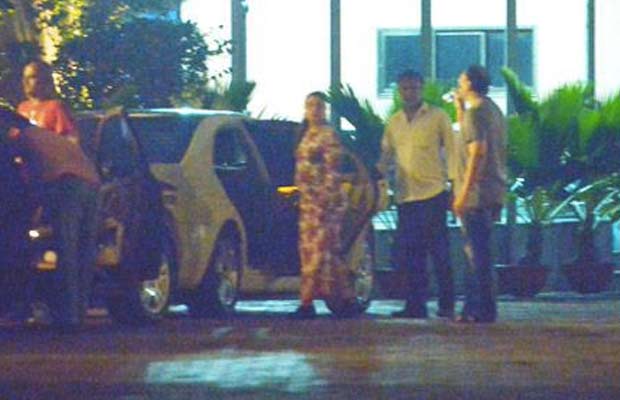 [tps_footer]We all know that Rani Mukerji is not an actress who has ever been keen on flaunting her personal life to the media. Now that she has become Mrs. Chopra, she maintains an even more high security private life, she does not prefer the media or other online portals reporting on the events of her personal life.

Looks like Rani was not aware when a fan that spotted her entering her car from her home clicked this exclusive picture and posted it online. In this picture we can clearly see the baby bump of the veteran actress. She has yet not made any official statement regarding her pregnancy but if speculations and rumors are to be believed, Rani is expecting an early next year delivery date.

Assumptions of her pregnancy were first made when reportedly, the ‘Mardaani‘ actor was holidaying in London with husband, filmmaker Aditya Chopra. She was spotted by some fans and media members entering a spa getting a pre-natal massage. Rani got married to Aditya in an intimate wedding ceremony this January. The wedding took place in Greece it was quite a hush-hush affair no wonder they are still keeping the news of their baby a mystery.

Well the photos say it all, and we all can easily spot the cute little bump on Rani. We are here with all good wishes for this expecting mother and the happy father to be. We hope that soon they will let us all know officially about this great joyous news.