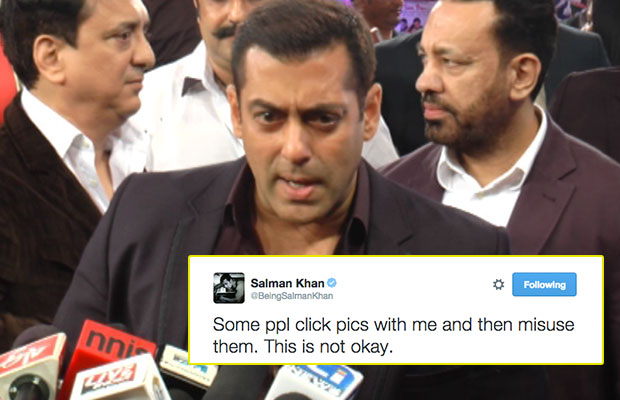 Bollywood’s handsome hunk Salman Khan who is known for launching new stars in the B-town industry, is angry about something and that he has warned all the users to beware about the same.

‘Bajrangi Bhaijaan’ actor, who is making all the headlines for his upcoming film ‘Prem Ratan Dhan Payo’, took to his twitter handle to clarify about a Facebook page which claims that Salman Khan is casting for his next film. To clarify on the same, Salman Khan took to his twitter handle to say, “A fake Facebook page claims that I am casting for a film. Beware of fakes and rumors. Neither me nor my managers are casting for any project.”

Well, this is not for the first time that the actor has expressed his anger on social media who misuse his name for the wrong reasons. It seems ‘Being Human’ star is going to be quite alert about the faux social media accounts and page that are running on his name.

On the professional front, Salman Khan is shooting for his much awaited film ‘Prem Ratan Dhan Payo’, and is also making headlines for his upcoming controversial reality show ‘Bigg Boss 9’. The first trailer of ‘Prem Ratan Dhan Payo’ will be reportedly out on October 1, 2015 and the first poster of the film will be revealed this week anytime.

Directed by Sooraj Barjatya, ‘Being Human’ star Salman will be seen playing double role in the film, one of desi and other of videshi. The film also features actor Neil Nitin Mukesh and Sonam Kapoor. The film will hit the theatres on November 12, 2015.