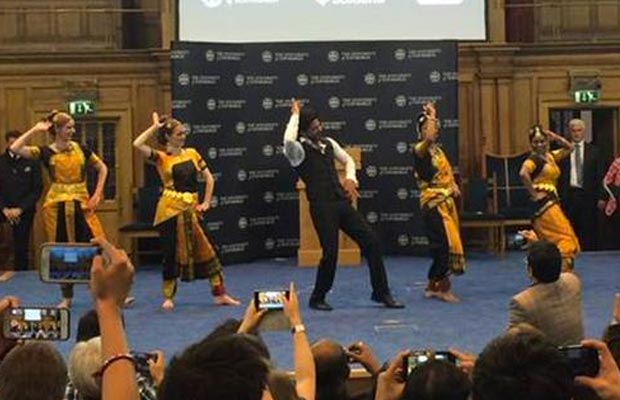 Bollywood superstar Shah Rukh Khan, who was recently awarded with doctorate at the University of Edinburgh rocked the Lungi Dance on stage. The ‘Chennai Express’ star was accompanied by few dancers dressed in Indian folk dance Bharatanatiyam costumes, and SRK did not shy away to break a leg with the beautiful ladies. The actor very joyfully presented his famous steps from the hit track Lungi Dance for the audience at the University of Edinburgh.

Well we got our hands at this small video clip posted by one of SRK’s fans who was present at the auditorium. And you certainly should not miss it! You don’t always get to see a Bollywood star being cheered by a room full of crowd at an esteemed university while dancing on a peppy Hindi song. Shah Rukh Khan was awarded a doctorate for his immense contribution to film and his philanthropic work at the prestigious University.

Shah Rukh Khan received a standing ovation by the end of his beautiful speech that he gave after receiving the doctorate. And after all the formalities were done, the center stage was cleared for SRK to show some of his Bollywood magic to the people of Scotland. SRK is surely a world renowned celebrity due to his global fan following, and the students of University of Edinburgh were more than happy to see his Lungi Dance live on stage!

King Khan has been awarded several national and international honours which include Best Indian Citizen Award and the Padma Shri award. He has also been honoured with Rajiv Gandhi Award for “Excellence in the Field of Entertainment” in 2002. This is Shah Rukh Khan’s second doctorate degree, as he has already received an honorary doctorate in arts and culture from Britain’s University of Bedfordshire in 2009.