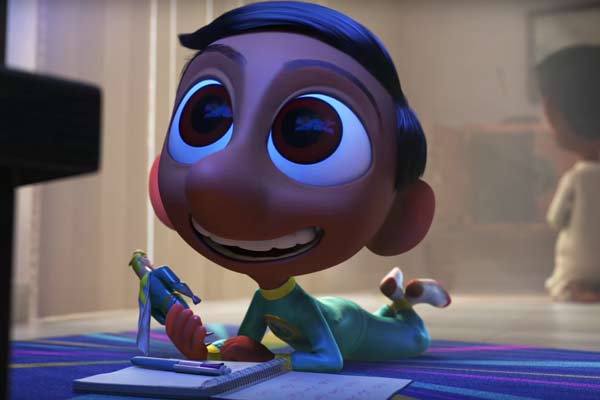 Disney Pixar’s new short film titled ‘Sanjay’s Super Team’ is out with its first look, and we’re absolutely loving little adorable Sanjay. The short teaser shows a little brown kid Sanjay and his Hindu father who is busy with his morning prayers. The short film is all set to premiere along with Pixar’s next film ‘The Good Dinosaur’. Directed by Disney Pixar artist Sanjay Patel, he has narrated his own story through this short film.

Growing up in an American environment as a brown kid was challenging for Sanjay Patel who used to think he is very different from his parents. While Sanjay wanted to believe in the new American dream, his parents were religious Hindu people who believed in deity worshipping. The short film will show a similar storyline about a little kid Sanjay, and his super team which will apparently consist of Hindu Gods. That will be exciting for sure!

The short teaser shows a volume war between Sanjay and his dad early in the morning. While little Sanjay’s eyes are glued to the television watching his favourite superhero, his father is busy offering morning prayers like a religious Hindu. When his father’s prayers interferes with his cartoon, Sanjay increases the TV volume to max, which ends up with his father switching the TV off.

Apparently after Sanjay sits with his dad for the prayers, he makes up an entire universe filled with action heroes, which are actually Hindu Gods! And that is how Sanjay forms his super team. The adorable little brown kid is full of dreams and imaginations, and this new take of introducing an Indian character is certainly refreshing for Disney Pixar audience.

‘The Good Dinosaur’ is all set to release on November 27, 2015 in India. The film shows an interesting take on world where dinosaurs did not become extinct. And well audiences are in for a double treat from Disney Pixar with ‘Sanjay’s Super Team’ team hitting the screens on the same day!