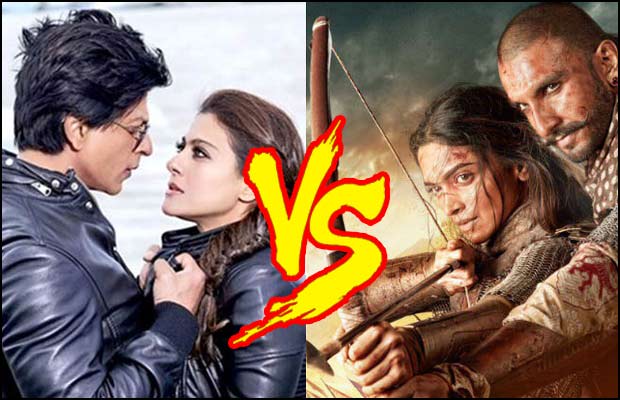 [tps_footer]Bollywood films Dilwale VS Bajirao Mastani have been co-existing at the box office with Shah Rukh Khan leaving Ranveer Singh behind. However things have changed on the first Monday business for both the films as ‘Bajirao Mastani’ has left ‘Dilwale’ behind for the first time since release. During the weekend the SRK starrer film gained major momentum and performed far better, but has experienced a huge unexpected drop in its first Monday collection. ‘Bajirao Mastani’ on the other hand has shown great performance on Monday with only a little drop. In Dilwale VS Bajirao Mastani, for the first time the latter is leading.

Thus in Dilwale VS Bajirao Mastani, the former earned Rs. 9.5 crores net approx (Rs. 95 million) while the latter collected Rs. 10.25 crores net approx (Rs. 102.5 million) on its first Monday. Worldwide however in Dilwale VS Bajirao Mastani, SRK is still leading the race with his global reach. Despite the same ‘Dilwale’ will have an upper hand when weekdays end and will still lead as the weekend collection was too good for ‘Bajirao Mastani’ to cope up with.[/tps_footer]