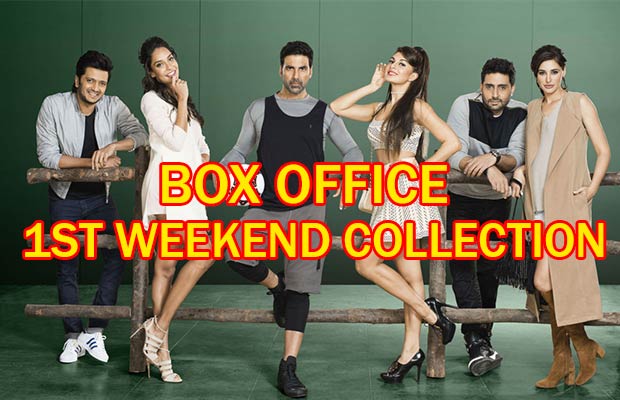 [tps_footer]Akshay Kumar, Abhishek Bachchan and Riteish Deshmukh starrer ‘Housefull 3’ has seen good collections at the Box Office since say 1. The film, which got released in 3700 screens in India on June 3, opened to a decent note on day 1 but upped collections well during the weekend. Housefull 3 saw a good collection on Saturday and then it went higher on Sunday too.

The comedy genre film, which has been directed by Sajid–Farhad and produced by Sajid Nadiadwala, has performed well in big circuits like Mumbai, Delhi, UP and East Punjab. Also, this is for the first time that Akshay Kumar’s film has gone over 20 crore nett in a single day. The numbers might not be huge at the Box Office considering the competition but the collections are showing good growth each day.

The constant rise in collection means audiences loved the film and that’s helping the film to create a better collection. Well, it remains to see what magic the film creates on its first Monday and also, Housefull 3 has a whole week to rule at the Box Office before the major release Udta Punjab.[/tps_footer]