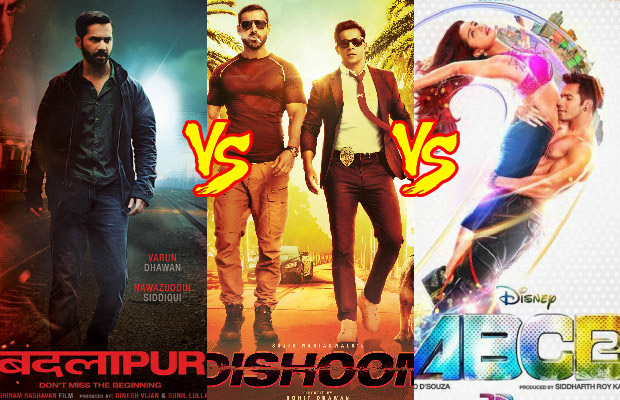 [tps_footer]Varun Dhawan is getting a good response for his just released film ‘Dishoom’. The action flick also stars actors John Abraham and Jacqueline Fernandez in lead roles. ‘Dishoom’ has received an average critical review but the film is termed as an entertainer by the masses. The movie was riding high on the minds of the audience for its star cast. Moreover, it also managed to create a recall value because of its hit songs and glimpses.

The film has passed its first day at the box office with above average collections. ‘Dishoom’ earned the opening of 30% in the screens. The first-day collection of the action flick is Rs.11 crore net approx. The movie is not too high in its earnings as it was assumed but with a non-competitive weekend, its earnings are going to increase.

‘Dishoom’ will earn most of its collections from the metropolitan cities because of Varun, John and Jacqueline’s fan following in those areas. In comparison to Varun Dhawan’s highly appreciated film ‘Badlapur’, the film ‘Dishoom’ has won. ‘Badlapur’ which was loved by the critics earned Rs.7 crore net approx. on its first day.

The film ‘Badlapur’ was made on a very small budget and was also tricky in its plot. Varun’s performance in the movie was highly applauded.

Varun Dhawan who is one of the most versatile actors gave a hit film with ‘ABCD 2′. The dance-oriented film also featured actress Shraddha Kapoor in the main lead. The successful prequel of ‘ABCD 2′ was a crowd puller for the sequel. The movie gained amazing collection on its first day with Rs.14.28 crore net approx.

Varun and Shraddha’s on-screen pairing was loved by the young viewers. The film was an entertainer which mainly attracted the youth.

Out of all the three films, Varun Dhawan’s ‘ABCD 2′ is still ruling in its first day collections. However, ‘Dishoom’ is likely to gain more collections in the weekend.[/tps_footer]