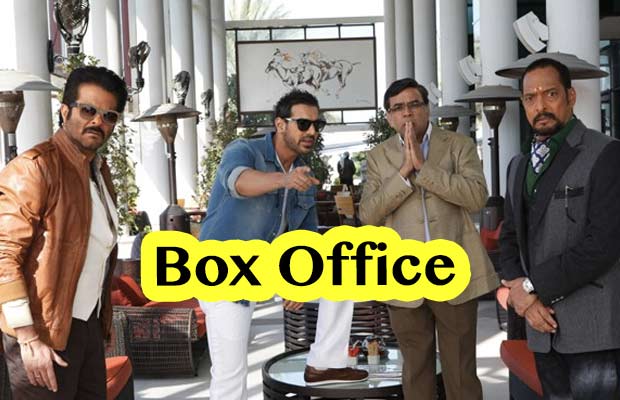 The multi starrer comedy flick ‘Welcome Back’, has impressed the audience with its surprising collections. The sequel ‘Welcome Back’ has surely created a massive record with its unimaginable collection. The movie has not only made the audience laugh in its home front but is also gaining huge crowd worldwide. ‘Welcome Back’ starring Nana Patekar, Anil Kapoor, Paresh Rawal, John Abraham and Shruti Haasan in key roles has earned Rs. 157 crore ( 15.7 million) net approx. in its worldwide collections.

The movie which did not have any back to back hard core promotions was predicted to fall short on the box office initially, but managed to do exceptionally well in its box office collections. The prime reason because of which the film saw huge crowd at the screens was the popularity of its central characters played by Nana Patekar, Paresh Rawal and Anil Kapoor.

The prequel of film features Akshay Kumar and Katrina Kaif in lead roles whereas the two were replaced by actors John Abraham and Shruti Haasan in the sequel. It was also being said that the absence of Akshay and Katrina from the sequel might be a disadvantage for the film. However, all speculations stayed untrue and the film ‘Welcome Back’ has gained loads of positive laurels.

Directed by Anees Bazmee, ‘Welcome Back’ is shot extensively in Dubai at luxurious locations. The movie also had an added advantage because of its successful prequel. ‘Welcome Back’ fell a bit short on its promotional strategies but nevertheless had very impressive word of mouth publicity.