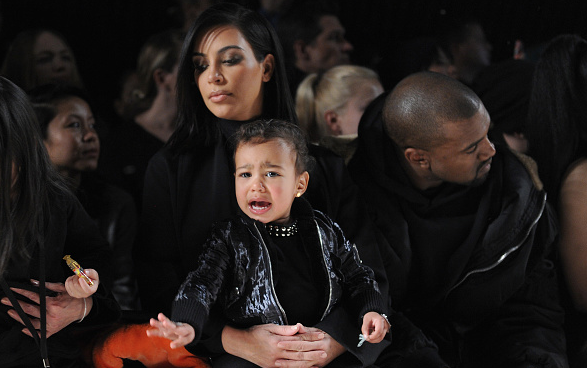 Hollywood socialite Kim Kardashian‘s daughter North West is too naughty at two, as she accidentally posted one of Kim’s bikini photos. Apparently North was just playing around with her mom’s phone when she accidentally opened Instagram and ended up sharing a sexy bikini body photo of mommy Kim Kardashian from earlier days. The 2-year-old Kardashian-West kid has more sense of technology than most of us!

Kim Kardashian initially took down the post shared by North, and uploaded the same photo as a throwback picture explaining what actually happened in the caption. Kim wrote, “North posted this while playing games on my phone. Not sure why or how she chose it but I’m not complaining! LOL I deleted it so now reposting it myself! #FBF from 10 years ago.” And whatever Kardashians do, they cause a stir.

And of course people have started throwing negative comments at her saying that she herself must have uploaded the photo and is now blaming it on daughter North West for publicity. All that aside, Kim Kardashian looks super hot in this throwback photo, but she definitely looks better now in a healthier shape. The soon to be mommy again star is nearing her due date and is excited to welcome her second child with rapper Kanye West.

Kanye West on the other hand is quite busy getting his clothing line running. The rapper who now associates himself with the name ‘Yeezy’ is gearing up for his new album Swish which is coming out great in his opinion. Kim Kardashian had earlier shared one adorable snap of small baby boots specially made by hubby Kanye for their unborn child. Well while North West has already gotten the hang of social media at the age of 2, we’re sure her brother will only follow her footsteps soon!