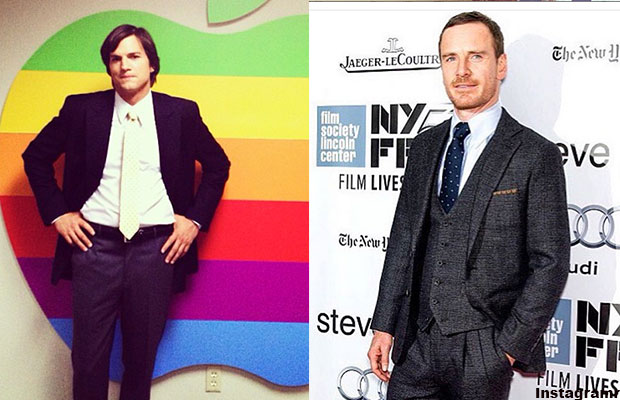 Well well, it looks like the competition is certainly on. Hollywood’s next biopic based on Steve Jobs’ life, the late business tycoon who has his birthday today, stars actor Michael Fassbender. During a recent promotional event, when asked about his preparations for the film, Michael playfully stated that he studied Ashton Kutcher for the role. Which is obviously a shade thrown at the actor as his 2013 film ‘Jobs’ did not receive good reviews from the audiences as well as the critics.

‘Steve Jobs’ by Danny Boyle on the other hand is already being called as an Oscar contender well before its official release in USA. Naturally, Michael is confident that his film will do far better than Kutcher’s did. Hence his reply seemed to mock Ashton in a way! All that aside, we’re certainly looking forward to catch him on screen playing the role of Apple’s cofounder Steve Jobs.

Also Read: Ashton Kutcher And Mila Kunis Embraced In The Bond Of Marriage!

Reportedly talks had surfaced that Steve Jobs’ family is upset about the negative depiction of him in all these recent biopics. They believe that the biopics are portraying him as an emotionless person, taking away all the integrity from his character. The upcoming film will show a more personal side of Apple’s mastermind Steve Jobs, touching the untold parts of his life with his wife and daughter. The trailer very smoothly shows the rise and fall of the entrepreneur and his transition from being a man to becoming a father.

German-Irish actor and producer Michael Fassbender is a critically acclaimed actor who has worked in numerous films like ‘X-Men: First Class’, ‘X-Men: Days of Future Past’, ‘Prometheus’, ‘12 Years a Slave’, ‘Inglorious Basterds’ and ‘The Counselor’ amongst others has undergone a complete makeover for his avatar in ‘Steve Jobs’. Shedding the muscular look, the actor has maintained a lean and simple look for the biopic. ‘Steve Jobs‘ is set to release on October 9, 2015.