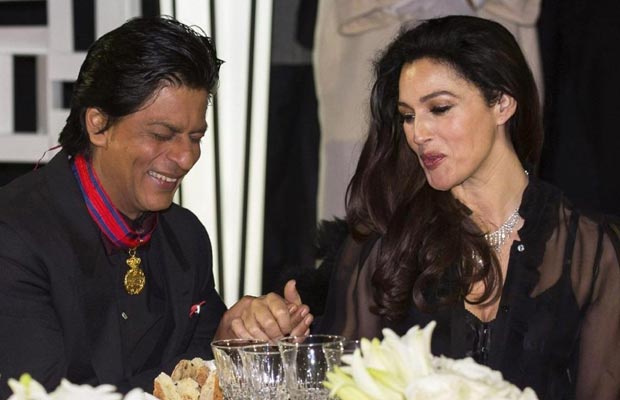 Hollywood star Monica Bellucci recently recalled the time she met Shah Rukh Khan at Morocco, and expressed what she felt about him. The ‘Spectre’ actress was asked about her thoughts on joining the Bollywood industry any time. To which the star reluctantly responded by saying that she cannot say anything right now. But she has met Shah Rukh Khan in Morocco and she thinks he is a kind hearted man.

Monica Bellucci opened up about her meeting with SRK by stating that the star was quite a kind hearted person and that she is glad she met him. Monica further stated that he has immense respect for Shah Rukh Khan and that she thinks Bollywood films are quite entertaining. The actress states she cannot dance or sing so she doesn’t think she would be a great choice for doing Bollywood films. Well hey, you can anytime sizzle us up with your action skills!

Also Read:Is The New Bond Film Spectre Really Worth All The Hype? Find Out Details

Monica Bellucci has played a pivotal role in Daniel Craig’s film ‘Spectre’ which released in USA few weeks ago. The film is yet to release in India. The actress further spoke few kind words about Indian cinema in general by stating that Bollywood has many talented and good directors. Indian cinema is doing really good according to her, and there is something different happening out there she says. Well surely a lot is happening in B-Town as well as other film industries in India!

Releasing on November 20 in India is one of the most anticipated action films of 2015, ‘Spectre’ also known as Bond 24. This will be Daniel Craig’s final film as the James Bond, and thus the anticipation has risen all the more. The film also features an impressive cast of ‘Inglorious Bastards’ star Christoph Waltz, the very famous Voldemort actor Ralph Fiennes, BBC Sherlock’s Moriarty Andrew Scott, WWE star Dave Bautista and actresses Lea Seydoux and Monica Bellucci.