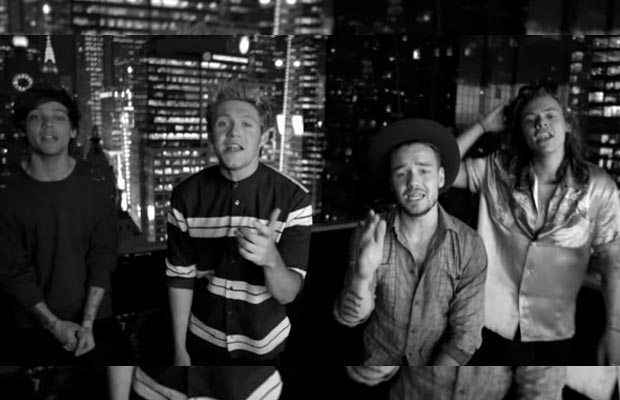 Hollywood’s famous boy band One Direction is out with their brand new music video for ‘Perfect’, and it is quite perfect! The black and white aura of the video adds a certain beauty to the song where the five musicians look hot as hell. One Direction which is best known for its emotional love songs has done it again in their own style for ‘Perfect’. The band has been touring for a while now, and has been prepping for this video’s release since quite a while.

The beautiful music video shows different sides of every member of 1D. The band is seen in a cozy room of hotel Intercontinental looking their finest best with sharp hairdos and on point outfit. Lots of fun, boys being boys kind of vibe and beautiful melodies sum up the aura of ‘Perfect’. The video sees 1D singers Harry Styles, Niall Horan, Liam Payne and Louis Tomlinson. The British boy band has gained massive following across USA in a really short time.

The video that released only few hours ago has already crossed a million views on YouTube thanks to the band’s loyal fan following. One Direction tweeted after the video release asking their fans if they’ve been watching the video on repeat. They wrote, “Has anyone else spent the past 7 hours rewatching the #PerfectMusicVideo?” Well we’re sure their 1D army must have stayed up all night making it go viral!

Following the release of Drag Me Down and Infinity, ‘Perfect’ is the band’s third track from the upcoming album Made in the A.M. according to One Direction‘s official website. The band was apparently supposed to perform at the Belfast concert but have backed out at last moment since Liam Payne has fallen sick. Meanwhile fans can rejoice with the new music video ‘Perfect’. Watch it here.