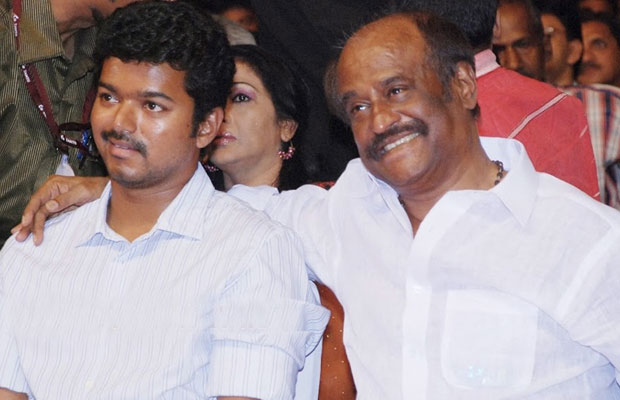 Tamil superstar Rajinikanth has given the ‘Puli’ team a reason to rejoice. The veteran actor took some time off from his busy schedule and watched Vijay’s recently released film ‘Puli’ at his residential place. Reportedly, Thalaivar was absolutely amazed with the spectacular sets and graphics shown in the film. He congratulated the team for making a film on such grand scale. Not just that, the actor believes that ‘Puli’ is on par with the standards that Hollywood films have set!

This is certainly the biggest compliment the film’s team can get who have done massive work behind the film’s VFX. Rajinikanth also revealed that what amazed him most about the film was actor Vijay’s acting skills. His effort to make a fantasy film like ‘Puli’ was commended by the superstar. Rajinikanth also praised his fellow actress Sridevi who plays the role of a queen in the film. Rajinikanth finished by saying that the audiences should take their family and kids to watch ‘Puli’.

‘Puli’ is a promising film with the finest graphics used by the film’s team. The first and second trailer of the film gave us glimpses of epic use of VFX which is taking Indian cinema to another level. The film shows amazing graphics at many places but what especially caught our attention were the graphics that were used to show the animals in the film. With sheer perfection and neatness, the film’s VFX team has pulled off something that many in the industry struggle to achieve.

Superstar Rajinikanth is currently shooting his upcoming film ‘Kabali’ in which he plays a double role. One of a cop, and one of a don. The first look sees the actor in a totally fit and lean avatar. We’re certainly rooting for his new flick!