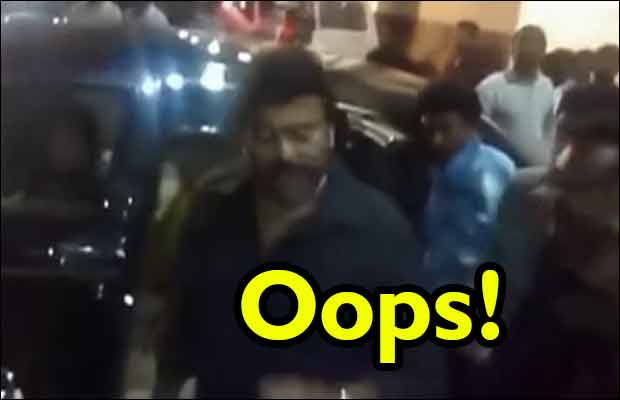 A video showing Telugu star Chiranjeevi scolding his fans after one of the recent events has surfaced on the Internet and gone viral. The 15-seconds clip shows the superstar leaving the venue and stepping into his car where a swarm of fans waited to catch a glimpse. Chiranjeevi apparently got miffed due to all the hassle and scolded his fans before riding off in his car. This video has upset a lot of fans for the rude behaviour shown by the actor, but many are supporting him as no one knows why he lost his temper.

From what we see in the video it seems like the fans were blocking Chiranjeevi’s way to the car, and many of the fans who were busy clicking selfies were making a commotion outside. This must have triggered the actor to lash out on his fans as he can be heard saying how many times should he tell his fans as every time they do the same thing. Looks like the star also called them ‘stupid fellows’. Apparently fans of the actor are expecting an apology from his side for this rude behaviour.

Reportedly, this leaked video is of the recent ‘Bruce Lee – The Fighter’ audio release. Chiranjeevi’s son Ram Charan plays the lead role, and the actor himself has a small cameo in the flick. This whole incident happened after the audio release while he was leaving the venue. Will this affect the superstar’s image and the film’s image in turn? Well only time will tell. The film is slated to release on October 16, 2015.

After a long hunt for scripts, it was recently revealed that Chiranjeevi might star in the Telugu remake of hit film ‘Kaththi’. The megastar has apparently agreed to nod a yes, after making certain changes to the film’s script to make it ready for his Telugu audience as his 150th film. Reportedly, V.V. Vinayak will direct the venture and it’ll be produced by Madhu along with Ram Charan.

Watch the leaked viral video of Chiranjeevi’s outburst on fans here and tell us what you think about it. Was the star being rude, or was his behaviour unintentional?