The ace filmmaker Mani Ratnam’s son Nandan was robbed in the city of Belluno, Italy. And hence his wife Suhasini Mani Ratnam took to the social media Twitter to ask for help for their son.

She tweeted saying, “SOS anyone near Venice airport? Can you help our son who was robbed in Belunno? He needs to reach airport. Please help.”

Decribing the location of her son, she further tweeted, “anyone near venice st mark square police station Pls pls help.”

But it seems that, instead of helping, people started making useless calls to the filmmaker’s son. So pleading to the people asking for not doing so, she again wrote, “ppl who can’t help in venice pls don’t call the number i posted earlier as your drain out his battery & he ll lose contact. people from india pls don’t call and harass some one who already is in distress”

It was very soon that someone called and agreed to help Nandan. And finally Suhasini could thank people for offering help. She wrote, “Help is on the way for our son. So those from Twitter who offered help. Thank you. He’s fine now.”

Her last tweet on her son’s update reads, “Our son checked into a hotel. He is safe tonight.”

Check out her series of tweets here: 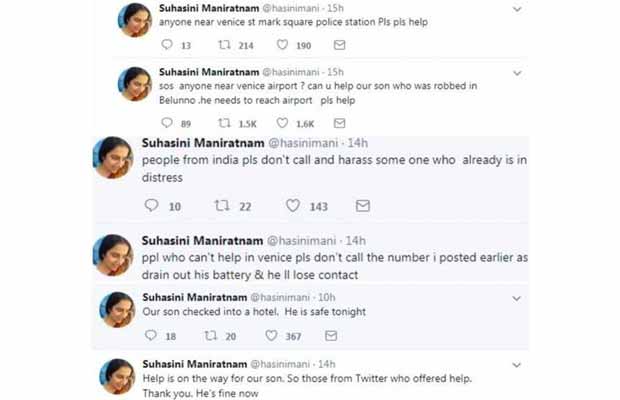 Talking about Mani Ratnam, he is an Indian director, scriptwriter and producer. He is mainly known for his work in the Tamil cinema. He has been honoured with the Padma Shri Award for his contribution to the Indian cinema.

In the Bollywood industry, he is known for films like Roja, Dil Se.. and Bombay. He is currently looking forward to the release of his upcoming film Solo, which is a bilingual drama.