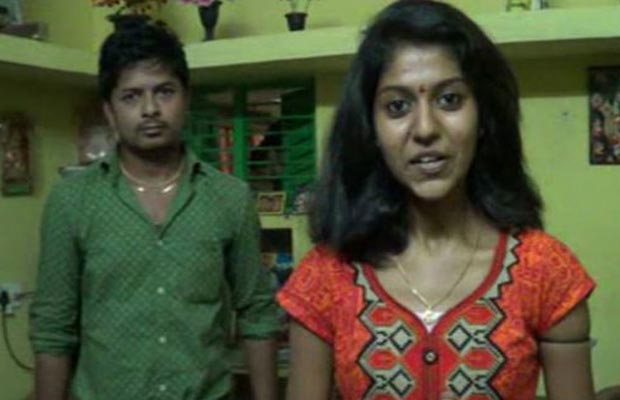 Telugu folk singer Madhu Priya got married recently going against her parents’ will, sparking a lot of controversies with her action. The young singer and her family had heated arguments about her decision where her parents did not want her to get married at such a young age. Madhu Priya who shot to fame when she was merely 12 years old, turned major only recently. Her parents were of an opinion that marriage at such a young age will interfere with her bright career, but Madhu had set her mind already.

After lot of persistence from Madhu’s parents and her relatives, when the singer still did not agree, she left her house to go reside at now husband Mangi Srikanth’s place. During which Madhu’s parents allegedly came to Srikanth’s house and tried to take Madhu Priya away forcefully. But she kept her stance and did not go with them. Soon after which the couple got ready for court marriage at police station.

Since there was no objection from the groom’s side, all the arrangements were made shortly and the ceremony took place amidst police security. The singer had invited some of the well known celebrities and politicians but citing to the controversial nature of the matter, only friends and close family attended the ritual. Apparently the folk singer’s parents had tried to stop the marriage at the police station as well stating that their daughter is too young and is not yet ready. But since Madhu Priya is a major now the police gave her the required support.

Madhu Priya shot to fame when she was just entering her teenage, through the singing reality show Super Singer on popular Telugu channel MAA TV. She further went on to host many shows and blossomed in the industry as everyone’s favourite anchor. She has also sung several folk songs and recorded traditional Telugu songs. Madhu met Mangi Srikanth while shooting for a short film, and that is when the duo fell in love.

Also Watch: Sonu Nigam Opens Up On His Fight With Salman Khan